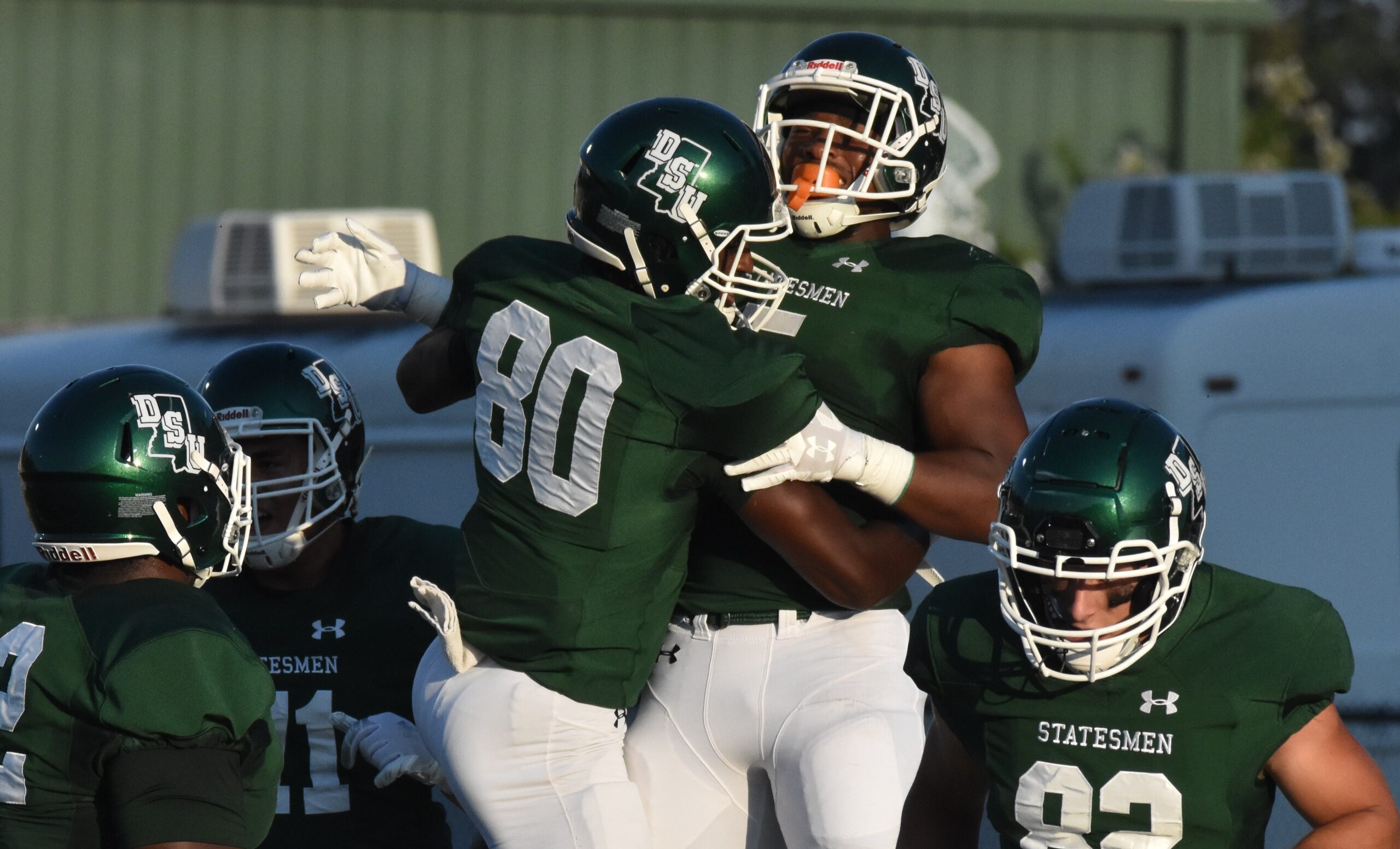 It had been a long wait.

On Thursday night (Sept. 2) at Parker Field-McCool Stadium, the Statesmen took the field for their first official football game in almost 22-months when they played the Bethel University Wildcats which are members of the National Association of Intercollegiate Athletics (NAIA). The Statesmen jumped out to a huge 34-0 lead early in the second quarter, which catapulted them to a 48-14 victory in front of 3,567 fans.

DSU came out with a lot of fire and intensity. Bethel had the ball first on offense, but the drive quickly came to an end as DSU’s Ty Woods intercepted a pass on the third play of the drive. When the Statesmen got the ball for the first time, they went right to work. Rico Owens II capped off a two-play drive with a six-yard touchdown run with 13:22 on the first quarter clock. DSU players were fired up about getting on the board. The kick from Conner Mantelli was good and DSU was up 7-0. The first two minutes of the game set the tone as the guys in green and white were loving life on the football. The players relished their time on the field.

“We created a turnover and stuck it in the end zone,” said Delta State Head Football Coach Todd Cooley about the first few minutes of the game. “We couldn’t hardly get anybody under control they were so excited, and it was just fun to be back out here.”

DSU out gained Bethel in total yards 509-356. DSU’s defense on the night forced seven turnovers, but the offense had five turnovers of its own. On special teams, DSU out gained Bethel in kickoff returns yards 113-52. Parker Burleson had a great game punting the ball for DSU as he averaged 51.3 yards per punt on three punts with two of them landing inside the 20-yard line. He also had four touchbacks on kickoffs.

“I’m glad we won, but we have a long way to go,” said Cooley. “The turnovers are going to be a point of emphasis this week. I thought we played decent on special teams. I was really proud of our kickoff cover team. Parker Burleson, in his first game here, had a lot of touchbacks, and I thought he did a really good job. There’s a lot to learn from this. We needed to play a game. It’s been a long time. I was proud of the people that came out, and I hope they had a great time.”

In the kicking game, Mantelli went 6-of-7 on point-after kicks and 0-for-3 on field goals.

DSU will play McKendree University on Saturday (Sept. 11) at Parker Field-McCool Stadium during the Pig Pickin’ festivities. Kickoff is set for 6:00 p.m.