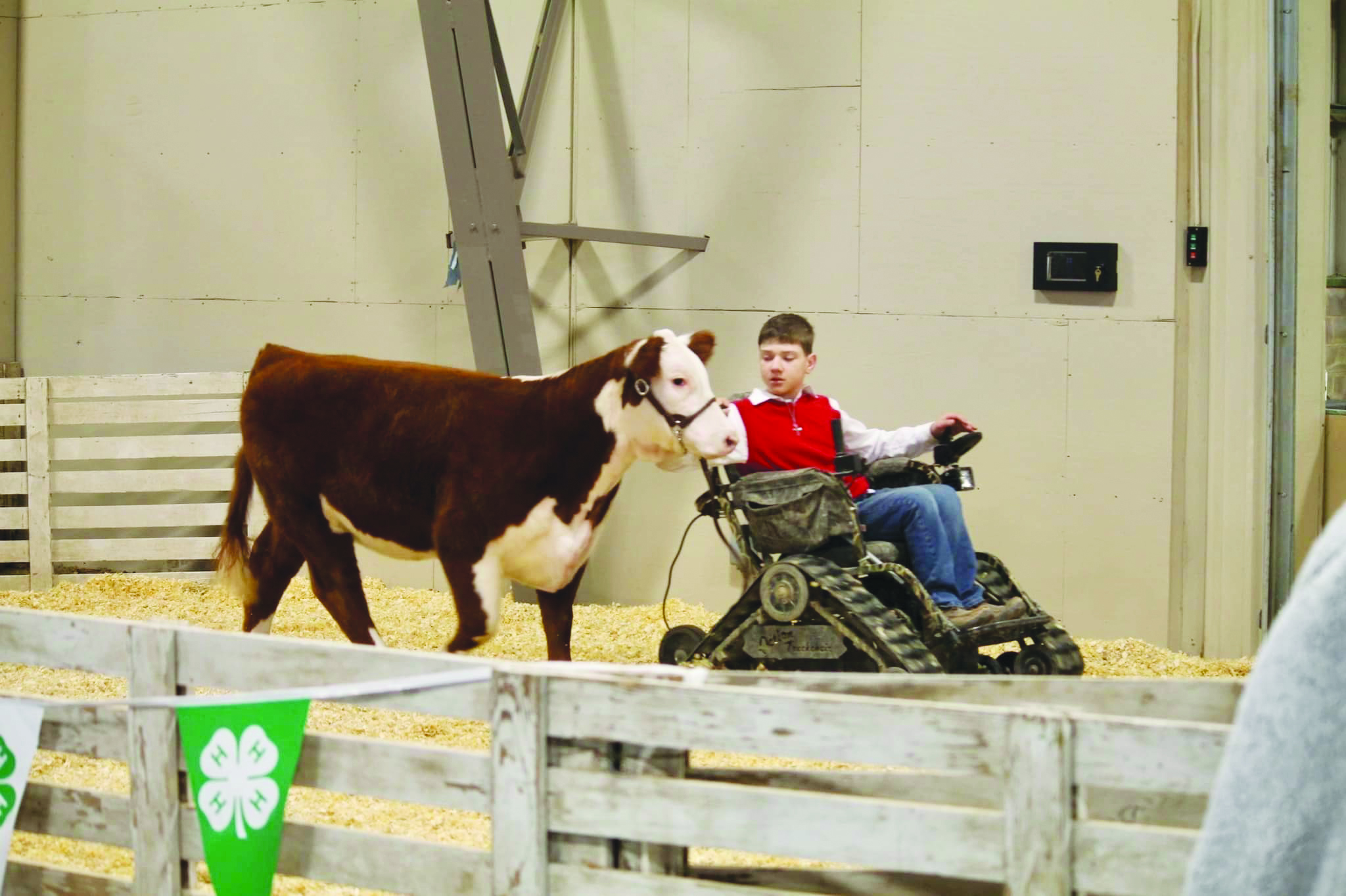 Beating the odds and doing what he loves

More than six million children are involved with 4-H from ages five to 19 in over 90,000 clubs. Their goal is to develop citizenship, leadership, responsibility and lie skills through experiential learning programs with a positive youth development approach. But, there’s one local 13-year old that has beat some incredible odds to add a new level to the 4-Hs – “head, heart, hands and health” and takes the 4-H pledge that is to better, “my club, my community, my country and my world” up a notch.

Wyatt Kurts was born with spina bifida and doesn’t have use of lower legs. But, that hasn’t slowed him down at all. If anything, he’s competing better and better each time out.

With the use of a special motorized wheel-chair designed for outdoor use, Wyatt herds and shows his cow, Ginger locally and in Leflore County, was recently in Oklahoma and will be at the Dixie National coming up. His mom, Jenny Coleman Kurts, explained a bit more.

“We’ve been a part of 4-H, I have a 20 year old daughter and she’s been in since she was old enough to show. Growing up, Wyatt was always exposed to it and when he was old enough, he started showing (cows) in 4-H,” she said.

Ginger and Wyatt have been to Lake Charles, Louisiana, two open shows in Jackson, the Cattleman’s Congress in Oklahoma City in addition to local 4-H shows. He hasn’t slowed down one bit.

“He is completely paralyzed from the knees down and partial paralysis from the waist down. He wears braces on his legs and he learned how to walk using those braces. Now that he’s gotten older, the distance is difficult. We use the chair so he has more freedom,” she said.

And, Ginger is a Hereford cow and that breed has shown to have a good temperament.

“In his very first show and very first event, his intent was to walk with the cow. Another cow spooked her and she ended up stepping on the back of his foot and he fell. It was a disaster but he got up, went and got his cow and finished that event,” she said. “Afterwards, a gentleman approached Wyatt and said, ‘You know what? We’re going to make this work better for you.’ And after the show they got in the arena and worked with the track chair. It was really cool because she responded a lot better to the chair. We decided it would be easier on him and his body if he used the chair.”

Wyatt also uses the chair to hunt and live his life with very few limitations and Ginger knows she’s getting fed when she hears a familiar sound.

“When she hears my chair, she goes and sits at the gate where the feed bucket is,” Wyatt said.

He has shown pigs before but cows seemed to much easier so he puts his focus in that arena. He’s won several awards, his class, Showmanship and placed well in Oklahoma.

“We didn’t win the class but did better than the day before and he placed. It’s such an accomplishment just to place as such a big show,” she said.

The family has 32 cows on the levee but Ginger is at the house where Wyatt feeds her twice a day, bathes every day and “works her hair, brush it out and put conditioner in her hair” and keeps her “show ready.”

“We’re going to keep her (after her show career) here at the house,” Wyatt said.

Exhibiting that 4-H spirit, Wyatt Kurts and Ginger are showing the world there’s no limitations and no hurdles, even from a wheelchair, for a true 4-H member.