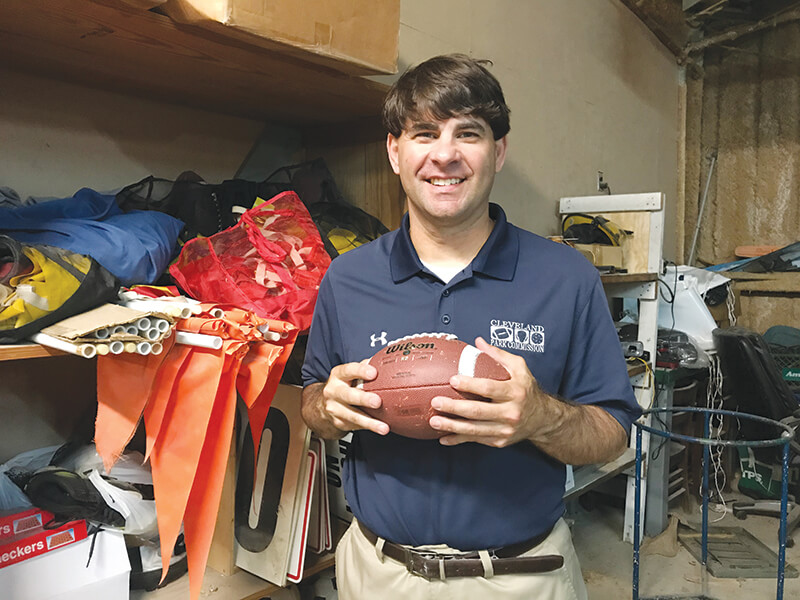 During Spring Break of 1996, Stephen Glorioso, a sophomore student at Mississippi Delta Community College at the time, was looking for a fun, part-time job to make some extra change to slide in his pocket.

Glorioso decided to apply for a job at the Cleveland Park Commission. The decision to work at the CPC turned out to be a career path, as the 44-year-old is still there serving the community 24 years later with the biggest change being he’s been full-time since 1999. Glorioso’s resume would consist of what his roles have been through the years at the CPC. His work history is the CPC.

Through out his career, Glorioso, who is currently the Athletic Coordinator, has made helping the youth of the community his life’s work.

To Glorioso, his love of Cleveland is fueled by his love of kids and desire to see them succeed.

“Kids get to get away from their problems and play ball in Cleveland,” said Glorioso. “I believe 110 % that the youth in Cleveland are as good or even better than any kids in any other town. I believe they can make all of their dreams come true. I love watching a kid when he first starts playing ball and seeing what he makes of himself and not just as a baseball player but as a person. You can tell at an early age the make-up of a kid. You like to see what kind of person he is and you would like to see him as an adult.”

Glorioso grew up playing sports in the park commission. He had to travel to get to the park as he lived in Gunnison which is approximately 30 miles from Cleveland. He started playing t-ball at the age of six for the Nowell Lumber Company team.

“Coming from Gunnison, I didn’t know a lot of the kids,” said Glorioso. “I had friends off that team and other teams that I’m still friends with to this day. I stopped playing at 18-years-old when we had Boo Seniors, and I played for the great James McBride who taught me a lot about life and sports. There were some really cool coaches and really cool people that I played with and still have pictures with and still friends on Facebook with. That’s what having the Cleveland Park Commission did for me.”

The chance for kids to interact with kids they wouldn’t normally come in contact with is something the park commission provides youth.

“I think it’s huge for diversity,” said Glorioso. “I think two people that wouldn’t normally be able to see each other can talk, be friends and play together. Even parents get to be around different people instead of the same old people everyday. I lived in Gunnison. If I never came to the Cleveland Park Commission, I wouldn’t know half the people I know.”

When Glorioso started working at the Cleveland Park Commission, Quinton Steen, who was the park director at the time, and the late Coach Sank Powe turned out to be  great role models for him during his formative years.

“There are not two better people in American than I would love to mold myself after and be mentors than those two,” said Glorioso. “I can talk for years and years about what those two people have done for me. They showed me hard love a few times and showed me if you make mistakes you can learn from them. I’m the person I am today, because of Mr. Quinton Steen and Coach Powe.”

Glorioso described some of the examples that Steen and Powe set for him.

“Coach Powe taught me how to talk to people, how to handle people and how to look at stuff from different perspectives,” said Glorioso. “Mr. Steen was a man who showed me you better bust your tail and give 110 % in anything you do and go the extra mile. You did need to be about what’s best for the town and look at the bigger picture.”

The late Tom Wilson, who was the athletic director at the CPC when Glorioso first started, was also a great teacher.

One person who has worked with Stephen when he first started and is still there at the CPC today is Drefuis Randle.

With men like Powe and Steen, Glorioso saw examples of how to be good to your family while excelling at work.

“You see what kind of men they are and you saw how they balanced their work life and their family life,” said Glorioso. “Sometimes, you have to intertwine the two to be the dad that Mr. Steen was to his kids and Coach Powe was to his kids. You see the relationship that Mr. Steen had with Miss Nan in a work environment and a marriage life and you see how Coach Powe balanced his life with Rebecca. Those are life lessons I got to learn on the job. I thought it was amazing how Mr. Steen and Miss Nan worked hand in hand on the job, off the clock and how they raised their kids. They have wonderful children. I’m fortunate to have had them around me.”

Whether it’s been a Dixie Youth World Series, State Tournament or whatever the event maybe, Glorioso has had a hand at either working on the fields, umpiring games or bringing in tournaments duirng his career. He has spent many long nights on the field away from his family. The lessons he learned over the years from Steen and Powe have served him well. Glorioso, a 1994 Bayou Academy graduate and a 1999 Delta State University graduate, has been married to his college sweetheart Noelle, a school teacher, since 2001.

Glorioso was overwhelmed with emotion when talking about the support he’s received from Noelle.

“Noelle has been my backbone through everything,” said Glorioso as he paused a minute thinking about their years together. “When we were hard at work, she was there. In the World Series in 2017 when I had so much going on there was stuff I didn’t ask her to do, she did. The most amazing thing she ever did was in the 2012 World Series she kept a notebook of everything we did and everything that if we ever had another one, we could do. Then when I told her the crazy idea of going after the 2017 World Series, she opened the notebook with everything in there.

“In the 2017 World Series, she was about to go back to school. When most teachers would have been sitting back and enjoying the rest of their summer, she was by my side working the World Series for 12 hours a day,’ added Glorioso who couldn’t fight back the tears.

Stephen and Noelle have two sons, Grayson, 15 and Collin, 13.

With beautiful memories flooding his mind, Glorioso remembered how helpful both of his sons have been over the years.

“I’m like ‘Hey Collin can you help me do a field?’, and he was like ‘Okay daddy,’” said the father of two with heartfelt recollection.

To this day, Glorioso’s family has continued to be there.

“My family has supported me through thick and thin. The good times and the bad times. They have meant everything.”