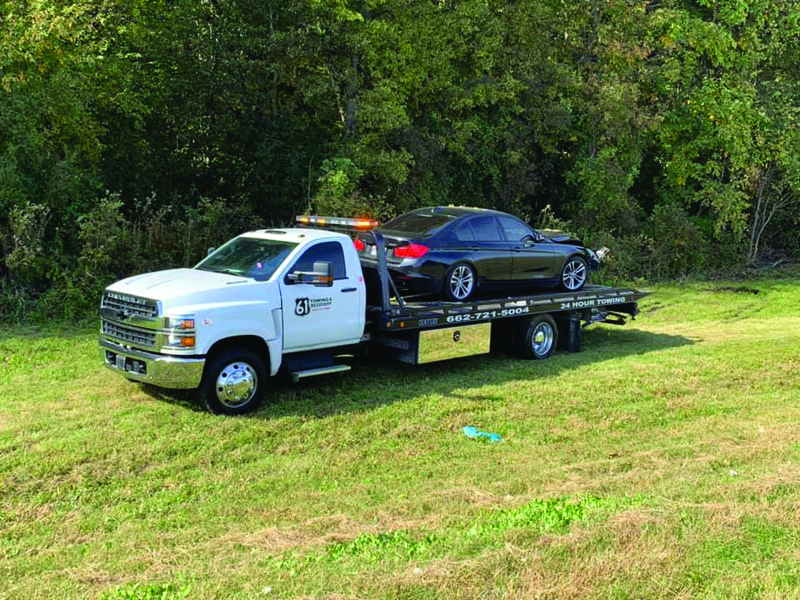 A business on the move

61 Towing and Recovery was started by Boyle entrepreneur, Michael Phillips, his third business after Cleveland Taxi Service and Cleveland Transport, about nine months ago. Needless to say, Phillips’ businesses are always on the move–in a manner of speaking.

“I started my first business, Cleveland Taxi, eight years ago, after buying an existing service from a friend,” said Phillips. “I began it because of the great influence Tara Herrin–who owns Catfish Cabin in Boyle and Rosedale–had on me, really. 61 Towing and Recovery provides a variety of services twenty-four hours a day: we have a snatch truck that is able to remove vehicles, as well as a rollback, a flatbed truck we used to pick up wrecked and broken down vehicles. We’re not fully in the repo business, but we will do a few now and then,” he said. “We mainly handle wrecks or roadside assistance.”

“My father owns a wrecker service,” explained Phillips about how he got involved in his new business. “And, so I had done this kind of work before and enjoyed it. I found a wrecker in Ohio, purchased it, and had it delivered–that’s how I got 61 Towing and Recovery started.”

The business serves the entire Delta

“Just recently, we took some gas to Indianola in a roadside assistance situation, for instance, and have gone so far as to unlock a car in Clarksdale, too,” said Phillips. “So, really, wherever there’s a need, we can show up and help.”

There is no minimum fee for services, although there  is  a  set price for Cleveland. All other rates or charges depend on the mileage accrued. Obviously, the current price of gas has affected the bottom line of all three of his businesses.

“Yes, it’s gotten incredibly expensive,” he said. “I have ten vans with Cleveland Transport that operate six days a week–we’re closed on Sundays–and so, yes, it has hit us.”

As far as his other two businesses–including Cleveland Transport–Phillips said he has gotten into the food delivery business as well as the traditional ride to and from any destination–doctor’s offices, grocery store, et al–and pick-ups for those individuals who have stayed out late and shouldn’t get behind the wheel.

“We do extensive background checks on our drivers,” said Phillips. “Drug screening, fingerprinting–you name it. Our employees are carefully screened so people who use our services should rest easy and be assured.”

With a  total of nine employees, Michael Phillips and his businesses are definitely on the move, 24 hours a day and usually seven days a week.

“Business is good and we’re glad to be able to provide any service that we can,” said Phillips.