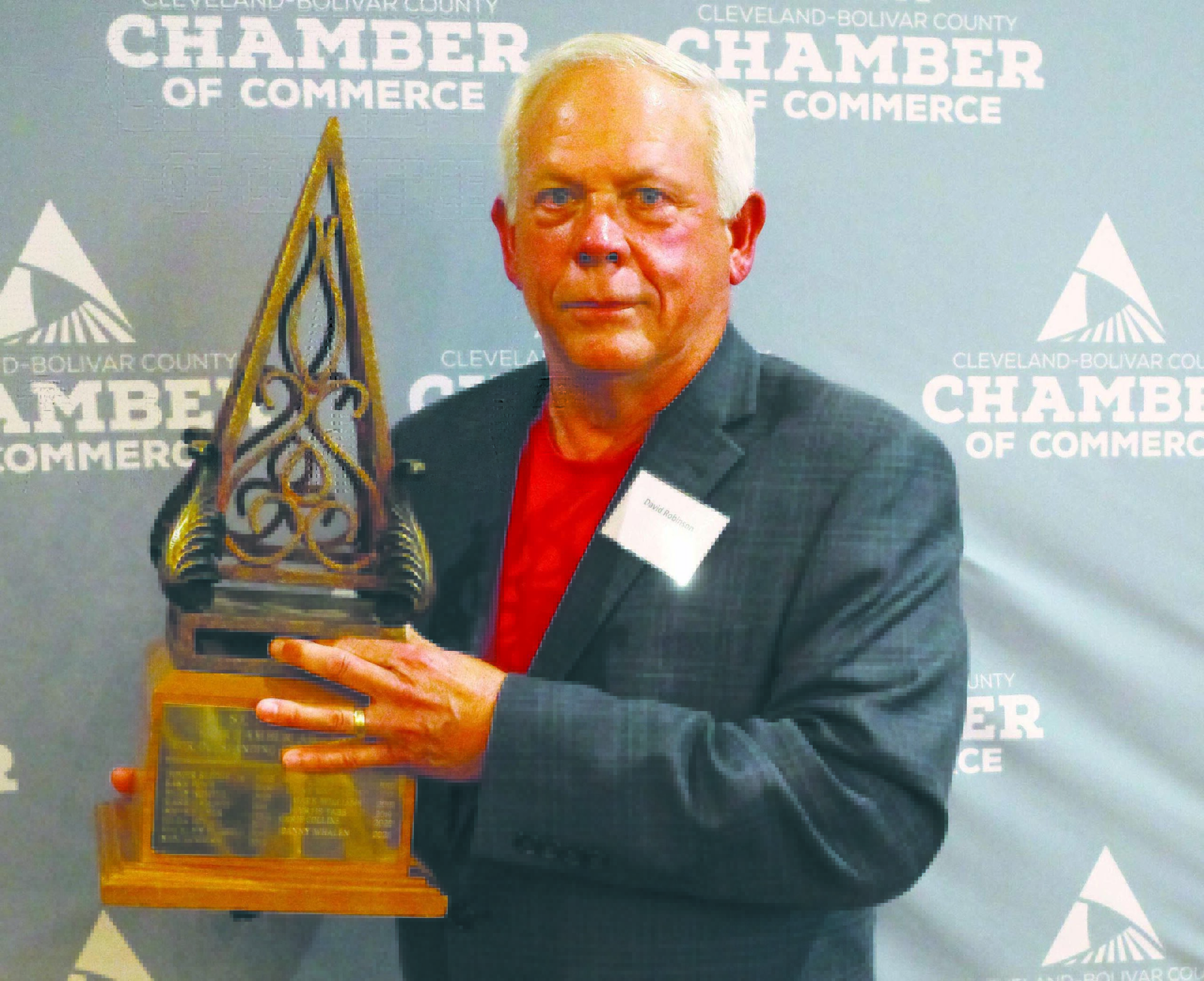 August 29 event was well attended and numerous awards were given

The Cleveland-Bolivar County Chamber of Commerce and Economic Development Foundation held its Annual Banquet Monday, August 29, at The Gin in the West End District. Nearly 250 Chamber and EDF members, community residents, elected officials, and local leaders attended which serves as an opportunity for the organization to celebrate the hard work and support of its volunteers and sponsors over the past year.

The Chamber’s most prestigious award of the evening, the S.E. Kossman, Sr. Award, was given to David Robinson in recognition of his years of outstanding service to the Cleveland-Bolivar County community.  Robinson recently retired after presiding over, and growing, the Robinson Electric Company for over three decades.

“Thank you to the Chamber Executive Committee and the other Board members for bestowing this special award to me,” said Robinson. “I am very humbled and appreciative.”

A Cleveland native, Robinson attended Pearman Elementary School before joining the very first class of elementary students at Parks School. He moved on to Margaret Green Junior High, then Cleveland High School, where he was a member of the Wildcats football team before graduating in 1971. After completing Hinds Junior College’s Industrial Electrical program, Robinson and his wife, Kathy Belk Robinson, returned to the area. David and his brother, Mark, assumed ownership of their father’s business in 1986.

Over the next three decades, Robinson Electric Company transformed from a mom-and-pop business into a multi-faceted electrical contracting firm.  The company earned a State Certificate of Responsibility in the late 1990’s and began taking on larger scale projects, even expanding its reach to Louisiana as part of the rebuilding efforts after Hurricane Katrina. By Robinson’s retirement in December 2021, the company had grown from six employees to over 60. It is one of the most trusted electrical contractors in the region.

Outside of work, Robinson still found time to be an active and engaged member of the Cleveland community. He served two terms on the Chamber of Commerce Board of Directors and is a past Chief of the Cleveland Volunteer Fire Department. He is the 2021 recipient of the Delta State Lawrence Stewart Service Award and is an Elder at the Covenant Presbyterian Church. Robinson and his wife have one daughter, Heather, and one son, Brian; they are grandparents to Hailey Laine Robinson, Hayden Brooke Robinson and Ashton Warren Harrison.

The Chamber of Commerce celebrated a number of other award winners during the special evening.

Robert Maxwell received the Chamber Award for his service to the community. Current Vice President of the Chamber of Commerce, Maxwell is Port Director for the Rosedale-Bolivar County Port Commission, a position he has held since 2010. He is the founding member of the Mississippi Ports Council, where he has served as vice-president, president, and chairman, and is the current First Vice President of the Inland Rivers, Ports, and Terminals Association.

The Chamber Award, for an exemplary committee chairperson, was presented to Laura Howell. The Executive Director for the Bologna Performing Arts Center (BPAC), Howell currently serves on the Chamber of Commerce Executive Committee as Vice President and is past President of the Cleveland Tourism Commission.  She is also a volunteer on the Chamber Membership Committee.

The inaugural Small Business Legacy Award, which was created to honor a long-standing local business that has improved the economy and quality of life for its residents, was given to Virginia O’Neal, owner of Cotton Row Bookstore. Jimmy McClellan, Jr. was awarded Outstanding Young Professional by the Cleveland Young Professionals organization.  Mayor Billy Nowell also presented the Lucy Janoush Award to Linda Collins at the event.

Larkin Simpson provided the banquet’s keynote address.  A graduate of Cleveland High, Simpson has a history of successes in economic development, both in Mississippi and in Louisiana.  He currently serves as the Executive Vice President for Louisiana Central, a regional non-profit organization, and was recently recognized as one of the top 50 economic developers in North America by Consultant Connect.

“The Chamber of Commerce is the driving force for our businesses and industry,” concluded Robinson. “Both Cleveland and Bolivar County are invaluable in the growth of our economy. Last but not least, thank you to the Kossman family for making this award a reality.”