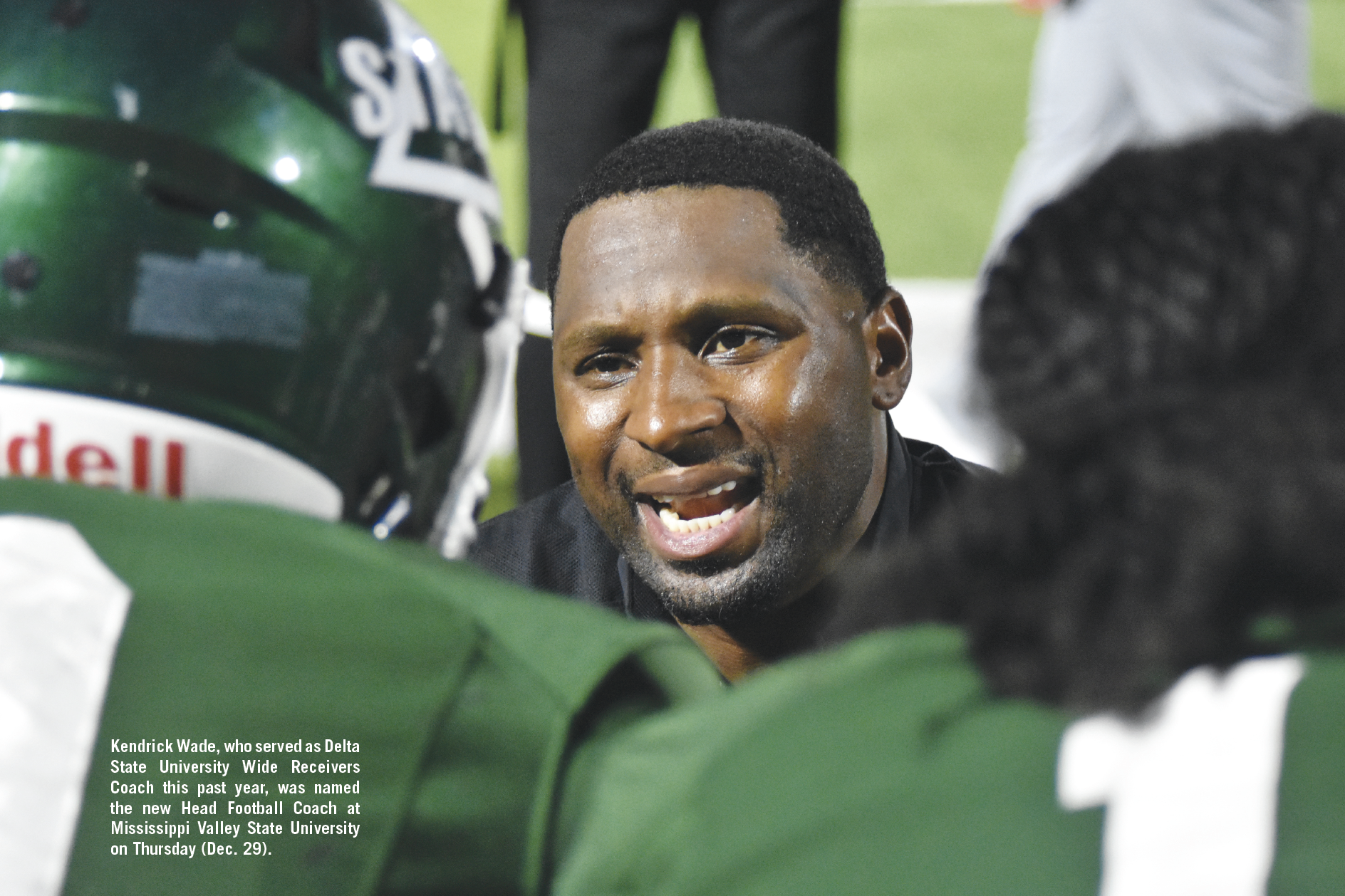 For any person in any profession, there is nothing like landing that dream job.

Kendrick Wade, who once suited up as a football player for Mississippi Valley State University on the Division I level, has always desired to return to the school at Itta Bena some day and be the leader of its football program. Last week, Wade found out he was getting his dream job as MVSU announced that he will be the new Delta Devils Head Football Coach. The announcement was made on Thursday (Dec. 29).

Wade will officially be introduced to the public as the new head football coach on Tuesday (Jan. 10) in a press conference at the R.W. Harrison Arena on the campus of MVSU at 11:00 a.m.

Wade, who served as the Wide Receivers Coach at Delta State University under Statesmen Head Football Coach Todd Cooley this past year, has a great reputation at MVSU. He was a standout wide receiver at the school and was named to the MVSU All Decade Team (2000-10) in 2016. He also had a stint where he served as an assistant on the Delta Devils coaching staff for two years in 2017 and 18. Wade earned his bachelor’s degree in Health, Physical Education and Recreation at MVSU in 2007 and earned a Masters of Science in Sports Administration degree at MVSU in 2018.

Wade will try to turn MVSU’s fortunes around as the Delta Devils went 2-9 overall and 2-6 in the Southwestern Athletic Conference this past year.

In Wade’s time at DSU, he helped guide the Statesmen to an 11-2 record with a share of the Gulf South Conference Championship and a trip to the second round of the NCAA Division II Football Playoffs. The trip to the playoffs was DSU’s first since 2017. This will be Wade’s first head coaching job on the collegiate level.

Wade, who graduated from East Side High School in Cleveland in 2000, has always wanted to coach his alma mater.

“It was going to take the right job for me to leave Delta State, because it was a place that I was extremely happy at,” said Wade. “There were people that reached out to me with some jobs since I had been at Delta State that I didn’t entertain. It meant everything to me to get a chance to go back to valley. I feel like I’m indebted to that place. I’m in the position I am today because of that place. It helped groom me and helped build me to become the man that I am today. I couldn’t turn down that opportunity. I”m just excited.

“Like I told the AD, I’ve seen this moment before it ever came too. I knew it would  happen at some point, but I didn’t know when. I knew that they would be calling me back at some point to resurrect that program.”

Under Wade’s guidance at DSU, wide receivers had 243 total receptions which was second in the GSC. The Statesmen also led the conference in passing completion percentage (63.4). DSU senior wide receiver Dohnte Meyers led the GSC in total receptions (65) and was second in the conference in receiving yards (877) under Wade’s tutelage.

Wade was grateful for his season at DSU.

“That one year at Delta State was the greatest year in my coaching career,” said Wade. “There’s no ifs, ands or buts about that. I’ve been at a lot of places where I learned what not to do. At Delta State, I learned a lot about what it takes to be a champion. I’m taking all of that to Mississippi Valley. Delta State will always be near and dear to my heart. I think Coach Cooley is a great friend of mine. I love him. He supported me with this decision. I kept him in the loop on everything that was going on. He was one of my biggest supporters. He didn’t want me to leave, but he understood this opportunity.”

MVSU hasn’t had a winning season since 2006 when the team went 6-5 under then head coach Willie Totten. The Delta Devils have never won the SWAC and haven’t been to the playoffs since 1984.

Wade was fired up about the chance to lead MVSU in the right direction.

“I’ve always had a fire and a passion about what I do, but the way I feel now it’s multiplied times a thousand,” said Wade.”I know no one is expecting a lot. The expectations and the bar at Mississippi Valley have been low. The opportunity to change the narrative is extremely important to me. A lot of people have been talking about it being a challenge, but I don’t see it as a challenge. I see it as an opportunity to do something that hasn’t been done around there in a long time, and I’m extremely excited about it.”

For Wade, recruiting is going to be a top priority in getting ready for the 2023 season.

Wade played high school football under Totten when he was the Head Football Coach at East Side in 1999.