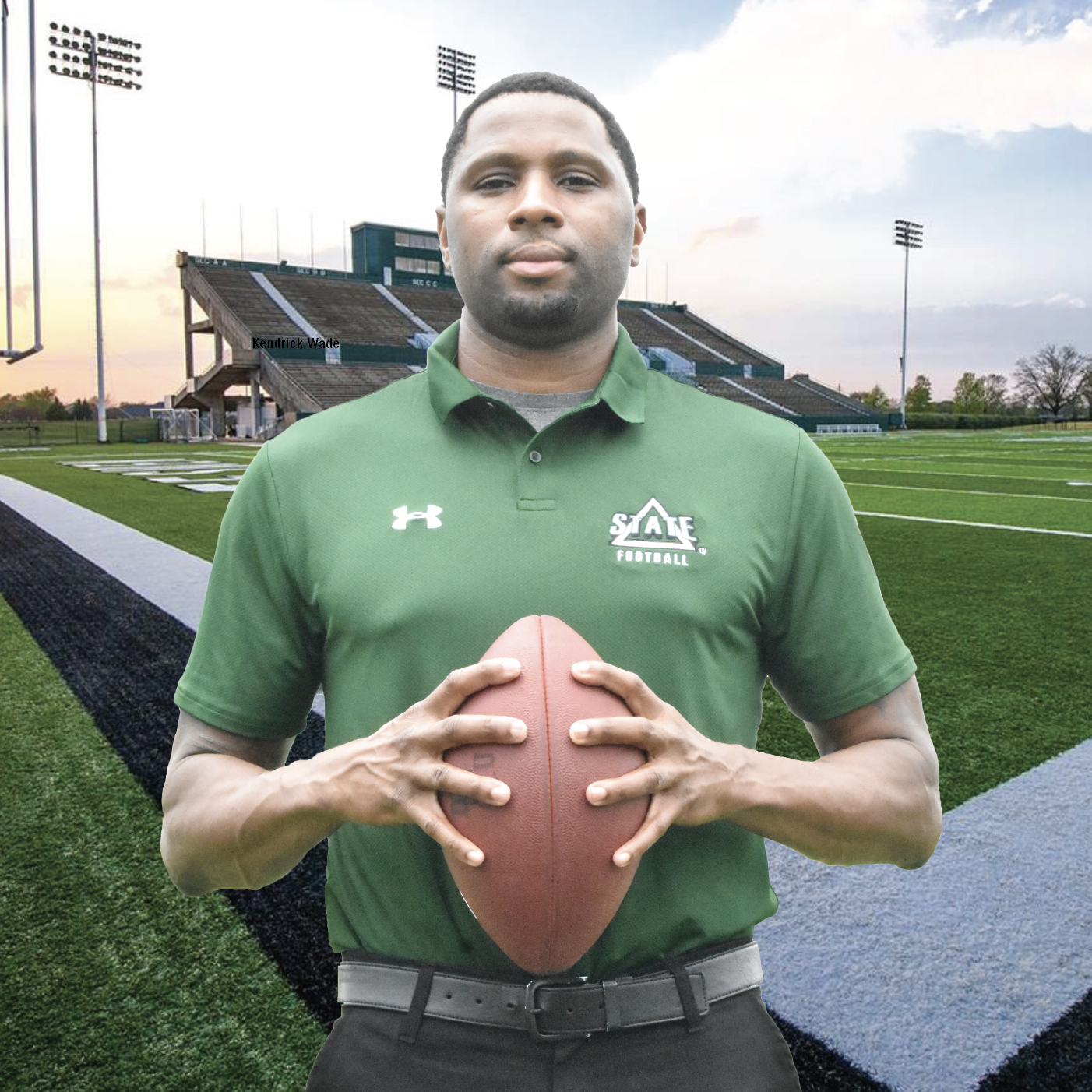 Kendrick Wade has returned to the town where he grew up at with the goal of making a difference.

Wade, who graduated from East Side High School in 2000, is back in Cleveland as he is the wide receivers coach for the football team at Delta State University under head football coach Todd Cooley.

Wade, who was a football and baseball standout at East Side, was happy to be back in Cleveland coaching at DSU.

“When I got the call from Coach Cooley, I was ecstatic,” said Wade. “I understand the history of winning here at Delta State and the tradition of winning championships. It’s really what drove me back. Being close to family is good, but my number one reason for coming back is to be a part of a championship level program.”

After East Side, Wade played college football and baseball at Coahoma Community College in Clarksdale and college football on the Division I level at Mississippi Valley State University in Itta Bena. At CCC in his sophomore year, he was selected as the football team’s MVP. At MVSU, he was named Most Outstanding Receiver in 2004. He ended up making the MVSU All Decade Team (2000-10).

After MVSU, he played four years of arena football in Texas and Arkansas. He ended up going into coaching when his playing days were over. In 2010, he became the head football coach at Fairview Middle School in Memphis, Tenn. where he served for four years. In 2014, he was named the head football coach at Middle College High School in Memphis as he held that position down for three seasons. After Middle College, Wade returned to MVSU and was an assistant coach there for two years.

In the time since Wade left Cleveland, a lot has happened. In 2017, Cleveland High School and his alma mater East Side High School merged to form Cleveland Central High School.

Wade never imaged his road back to Cleveland would end up at DSU.

Wade was excited about bringing the knowledge he’s gained from his years of experience back to Cleveland.

Since Wade was hired to be DSU’s wide receiver coach, he has hit the ground running. Over the summer, Delta State held camps where young players were able to visit the campus and workout.

Wade was excited about the amount of young people from the area that showed up at the camps.

“We had so many kids from the Delta on this campus that hadn’t been here before,” said Wade. “Being able to kind of connect those dots and bridge that, I think it’s been great just seeing kids coming from where I came from. I’ve walked these streets of Cleveland, and I was in the streets playing basketball and football over in the parks and Bear Pen Park and all of these other places here in Cleveland. When I see them, I see myself. I know where I’ve been, and I want them to experience that and even more.”

Wade has enjoyed being a part of the coaching staff and is thankful to be working under Cooley.

“Coach Cooley is one of the most competitive people I’ve ever been around, and I’m a competitor,” said Wade. “I love it. He’s so passionate about it. When I see Coach Cooley, I see myself with his passion. The staff has been great, and they’re smart guys that have been around good football and understand football. It’s been everything that I expected and more.”

Wade said he is focused on helping the Statesmen be a more competitive team that can compete for the Gulf South Conference title.

“I’m just going to do my part which is coach the receivers,” said Wade. “The best thing I can do for this team is to have my position group to go out there and perform at a high level each and every time they step out on the field.

DSU had its first official practice on Friday (Aug. 3) and will open the football season on Sept. 3 when the team travels to Frankfort, Ky to play Kentucky State.