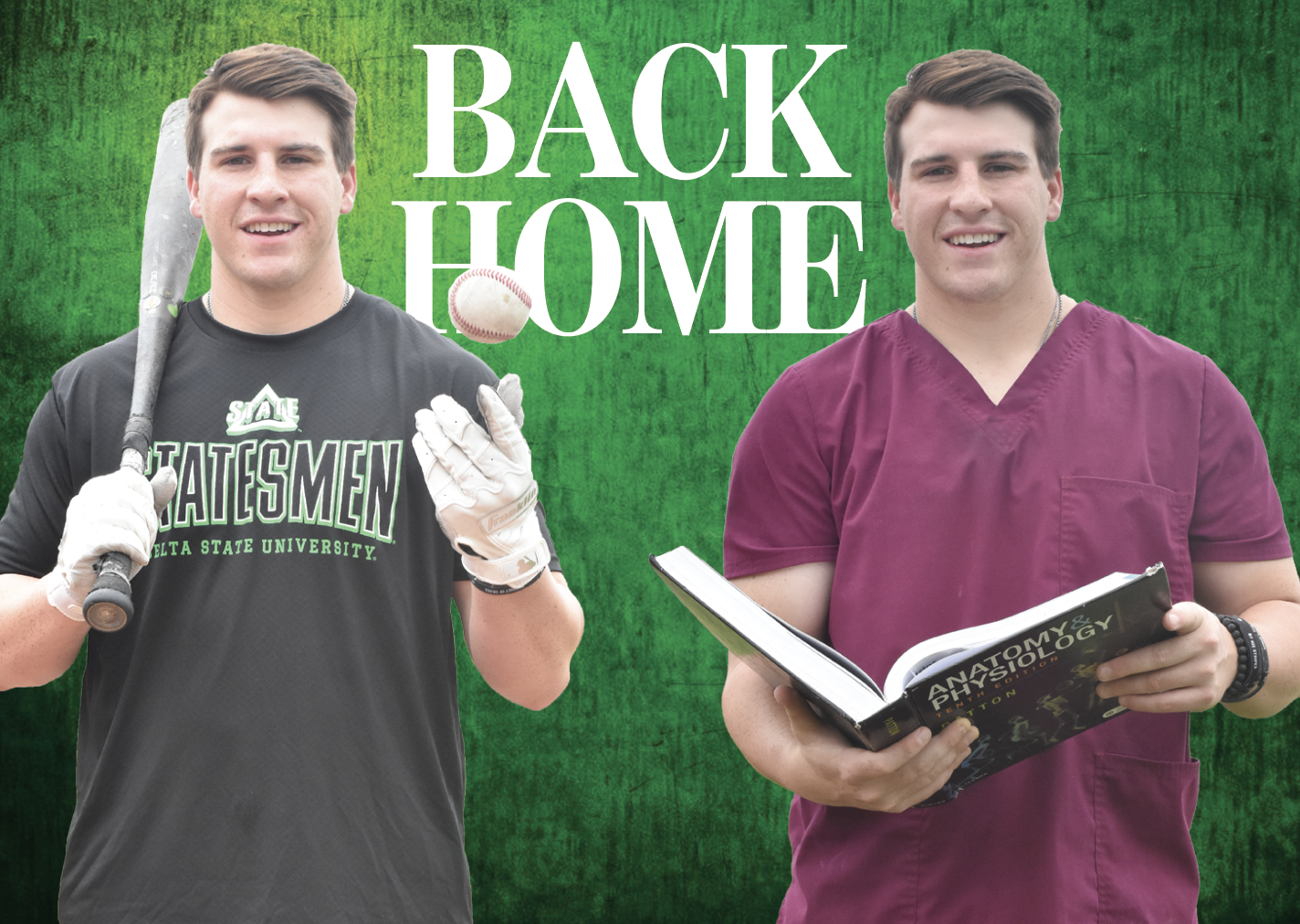 Stallings pursuing his dreams at DSU

When it comes to going to college, many youth want to get as far away from home as possible.

For Eli Stallings, the chance to go home to play sports and pursue his life’s goals are a dream come true.

Stallings, a Boyle native that graduated from Cleveland Central High School, has been getting ready to come back to Cleveland and enter his first year playing baseball at Delta State University. He is also majoring in exercise science as he would like to be a registered nurse when he leaves school.

The 20-year-old, who will be a junior in the classroom and a sophomore on the field, grew up following DSU sports as he cheered on his older brother, Ben Stallings, when he played football at DSU from 2006-08. Stallings will come to a DSU baseball program that has a storied tradition as the Statesmen have made it to 34 NCAA Division II Baseball Regionals, won 15 Gulf South Conference Championships and captured a Division II National Championship in 2004.

After playing baseball and going to school at Mississippi Delta Community College in Moorhead for two years, the young catcher will play at the college that’s always been near and dear to his heart.

“When I was coming out of high school and signed with Mississippi Delta, I told my parents I eventually wanted to come back and play where I grew up and was happy,” said Stallings. “I wouldn’t have it any other way than to finish out my career in the town I’ve always been around. With the winning tradition and the expectations that Delta State baseball brings, it was just a perfect fit for me.”

The environment at MDCC proved to be a great experience for Stallings. He had great success on the field last season, as he hit .314 with five home runs, 27 RBIs and 28 runs scored in 36 games. He was also inducted in the MDCC Hall of Fame. This past year was particularly special considering the fact his freshman year in 2020 was cut short due to the COVID-19 pandemic.

“Coming out of high school, it was still kind of like home as I was going to Mississippi Delta at Moorhead,” said Stallings. “Going into the 2020 year, I was getting acclimated to college baseball and the ins and outs of how things worked. When the pandemic hit, it was just another obstacle in the way. When ever I got the phone call from my coach Luke Stanley, he just told me to prepare myself, get ready for the 2021 season and big things would happen. I was fortunate enough to have a pretty good year at Mississippi Delta. There were ups and downs, but the pandemic was something that I had to face to continue my baseball experience. That’s something I’ve always wanted to play since I was 10-years-old.”

Stallings described his feelings when he first got the news that the pandemic put an end to his first year on the diamond.

“Whenever Dan Rives called me that Monday afternoon and told me that the season was cancelled, I was just at a loss for words,” said Stallings. “I really couldn’t describe it. It was very upsetting, but at the end I knew there was going to be another season. When ever that time came, I knew I needed to be ready. I didn’t care what measures I had to go through to get my work in, I was going to do it.”

During the pandemic, Stallings worked out a lot particularly at CCHS. He got a lot of support from his family during the period he was at home. The goal to become a nurse also developed during this time. He received a lot of good advise on the profession from his mother, Rhonda Stallings, who has been a nurse for many years.

“I was with her in the house everyday,” said Stallings. “She would mentor me through if this was really what I wanted to do. At that point, the only thing that was open was the hospital (Bolivar Medical Center), so I eventually got a job there. It was the best decision of my life as far as finding out what I wanted to do as a man. On the baseball side, I was just outside throwing balls with my dad as often as I could just trying to get my work in.”

Stallings has enjoyed his time working at the Bolivar Medical Center.

“That’s just where I belong,” said Stallings. “I love it. The people there are great, and they taught me a lot of things that are getting me prepared for what I’m going to do for the rest of my life.”

Stallings felt that the head coaches he played for at MDCC prepared him well for going to DSU as Rives and Stanley had played at DSU in the past. He was thankful for everyone at MDCC that helped him during his time there and was grateful for all the support he got from everybody at CCHS.

Heading into the year, Stallings has been eager to hit the field for the Statesmen.

Stallings said DSU Head Baseball Coach Rodney Batts went over what’s expected out of the players in the program.

When it come to managing grades and athletics, Stallings has always understood his priorities.

“I have around a 3.8 GPA, but that doesn’t always come easy,” said Stallings. “You have to work just as hard in the classroom as you do on the baseball field. The baseball part isn’t going to take care of itself if you’re not taking care of your books. That’s why the student is in front of student-athlete. You first have to take care of your studies before you even step on the field. Usually, if you work hard in the classroom, it will transition well on to the baseball field.”

Stallings has enjoyed being around Batts and his staff.

“They’re great people,” said Stallings. “They’ll do anything for you. I was looking for an apartment to live, and the whole coaching staff was asking have you found somewhere to live or do you need someone to live with. They were helping me on stuff that has nothing to do with baseball. They’re just great all-around people.”

Batts was excited to have Stallings on the team.

“Eli is a hard nosed, physical kid,” said Batts. “He is a guy who is not afraid to work. Being a local guy, he grew up around Delta State. He already knows, a lot about the school, the program and our league. We are excited about Eli being in our program and what he will bring to it.”