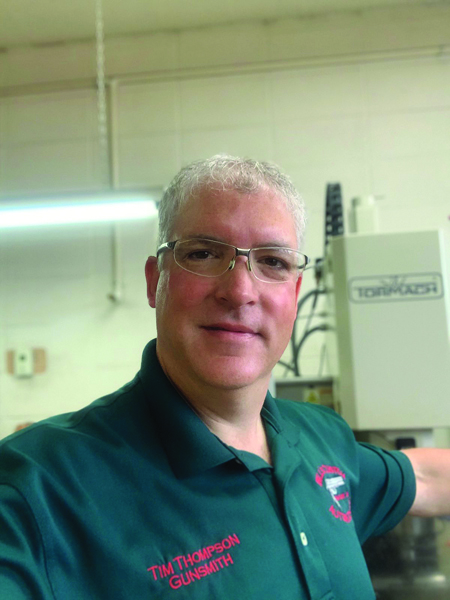 Three Generations of Gunsmiths in Shelby.

The name sounds as ordinary as any—Bill’s Custom Automatics. The small white nondescript building in the town of Shelby, the highway now bypasses, became the home for the business in 1991. But, don’t let the façade fool you. Inside, there are generations of gun knowledge and gunsmith excellence rarely found in today’s world. Names like Smith and Wesson or Remington may come to mind when firearms are discussed, but for those in the know, anything produced by a Thompson at Bill’s Custom Automatics is not only a quality firearm, but one that brings the satisfaction that old school work ethic and hand-made attention to detail are priority number one.

These days, second generation gunsmith, Tim Thompson holds down the work bench where rifles and pistols are hand crafted. His father, Bill, a former Anchorage Police Officer who first worked the frigid land of Alaska as a gunsmith before coming to the mainland where his wife’s (Emma) sister lived. He opened the gunsmith shop, and Tim who was in the Navy and apprenticed under Jim West of Wild West Guns while in Alaska, came along side in 2003 to continue the excellence that is Bill’s Custom Automatics. Thompson took over for his father in 2013. These days, the third generation is represented by Tim’s son, Hunter, who is awaiting his Marine Corp Officer Candidate School to begin in Quantico. The COVID crisis interrupted his education and he found himself toiling away alongside his father, apprenticing his own gunsmith skills.

“Hunter turns the lathe working the rifle barrels for us and he’s autonomous. He does all the chamberings, crownings, muzzle threads and action blueprinting. He’s learning the stock fittings. I’m not sure if he’ll get into the pistolsmithing side of it” Tim Thompson says of his son. “He grew up in this environment just like I did. He’s been working here full time and it’s a blessing.”

Tim enjoys looking over and seeing his son under his “apprenticeship,” but he knows that won’t last forever.

“The Marine Corp will eventually move Hunter where they have a need for him, but it’s just a blessing to be able to interface with him every day. I’m grateful he’s shared the gun shop and it’s been a blessing to him. Hunter has mastered the lathe and it’s no small task. It’s a complex piece of machinery. He’s a sponge at only nineteen. Who knows what he’ll do with this knowledge.”

As a retired Police Officer, Bill Thompson, took special care of police handguns at no charge, a task Tim finds time to complete each day for those in need.

In the beginning years of the business, every gun was painstakingly built by hand taking months to hone and perfect each ingredient. Tim spent countless hours pouring over every centimeter of the cold steel getting everything just right and perfect and personalized for each gun owner. He continued this process for a few decades, but the demand always was much more than he could ever hope to supply. He decided to up his game in the one-man shop and brought in a new CNC machine that he could set up and fine tune with his own settings and begin to build more than one at a time.

But, before he started trying to hammer out more 1911s, he had a plan. He didn’t want to give up the quality and workmanship that could come with mass production. He began taking classes on his new machine, even travelling to Wisconsin for in-depth training over several weeks. After learning the machine inside and out, he was ready to put it to use. Over the years, Tim has found quality suppliers that he orders raw parts from that he takes and works his magic over to create a personalized handgun like no other.

“It can take up to six months to source the materials. We’re constantly building them as they come in,” says Tim. “We always try to schedule rifles in the wintertime. We don’t want to be building pistols in the middle of deer hunting season in Mississippi.”

Thompson’s work is overseen by the ATF—Alcohol, Tobacco and Firearms—division of the federal government. His work is consistently audited. With each run, gun enthusiasts begin calling and stopping by and getting in line for the magic Thompson creates in his shop. These are not your ordinary handguns off the shelf of your favorite gun store. The highly customized handguns are personalized for each buyer.

“These are called a Custom Carry and are on our own frames,” he says. “We have a man in Texas that CNCs the frames out of bar stock to our specifications and they have our name on them. We do our own slides in house and are more involved in the manufacturing of our own guns.”

The Custom Carry pistols come in an array of calibers from 9-millimeter, 10-millimeter, .38 caliber, .40 caliber and .45 ACP.

“A .45 Auto is normally the most popular caliber that we build, but 9-millimeter in the last two years has seen a huge resurgence as has the 1911. The ammo is less expensive and the ladies can shoot the pistol much more comfortably,” says Thompson. “They come in blue, polished blue or stainless steel. Our signature grade gun is where you get the exotic finishes and more creative metal work. But, these still have a completely hand-fitted barrel system and hand fitted slides. I build every one of them still. The machining aspect is about four days of a three-week process. And then the next two and half weeks is all hand work on that volume of guns.”

Currently, it takes Thompson three to four months for each handgun run over a planned eight-hour day. He builds anywhere from eight to ten handguns in each run.

With the CNC process, it allows Thompson to configure eight guns at once instead of manually machining the slides, frames and every other piece of the gun—one piece at a time.

“I’m able to do them at a number. It’s just as convenient to cut eight of them instead of one,” he says. “That was the goal for this gun.”

And, Thompson has plans to use his CNC on his other gun builds including his Competition Pistols, Hunting Rifles, competition rifles and 1911 configurations.

“Whether they be for carry or bar b que showing off—we call it a ‘Sunday go to Meeting Gun’—the point is we can be much more creative now,” he says. “This is not a production firearm but a custom gun offered at a much more reasonable price.”

The Custom Carry Guns include plenty of “Thompson Touches” as the three cuts on the top of the slide—called a Tri-Top—and the pockets cut on side of the slide for cocking purposes are all unique to his design.

“Other folks have the capacity and do similar things but not like I do it. This is not a production firearm but very much a custom gun offered at a much more reasonable price,” he said. “Most of the handguns I make are in the $5,500 to $6,000 range. The rifles begin around $3,000 with a production action but that’s with no optics. If we build on a custom action, those guns start at $5,200.”

Thompson got his initial introduction to metal working in his high school metal shop from junior high through graduation. He then went into the Navy and was in metal-smithing school there where he worked on aircraft.

“I’ve made pistols for the past twenty-nine years and started making rifles about fourteen  years ago,” says Thompson.

Thompson keeps customers in the build loop as he continually creates videos for them to see their gun being formed and created all the way through test shooting before handing over the final product.

“I really try to interface with the client when I’m on their build. I keep people informed as a I take video clips of me fitting certain parts. It makes the client feel vested in the process. It gives them an idea of how absolutely painstakingly and time consuming and the attention to detail being put into it. I take video and I take pictures and share them as the gun evolves.”

In addition to making these highly personalized and quality handguns, he works with Jessie Harrison the “Female World Champion” and First Female USPSA Grand Master. He’s been working on her competition guns since 2012. He’s also works with “6 Division Grand Master” Johnny Brister. No slouch himself, Thompson is a National Record Holder in long range shooting. Something he got started in as his father was a competition shooter as well.