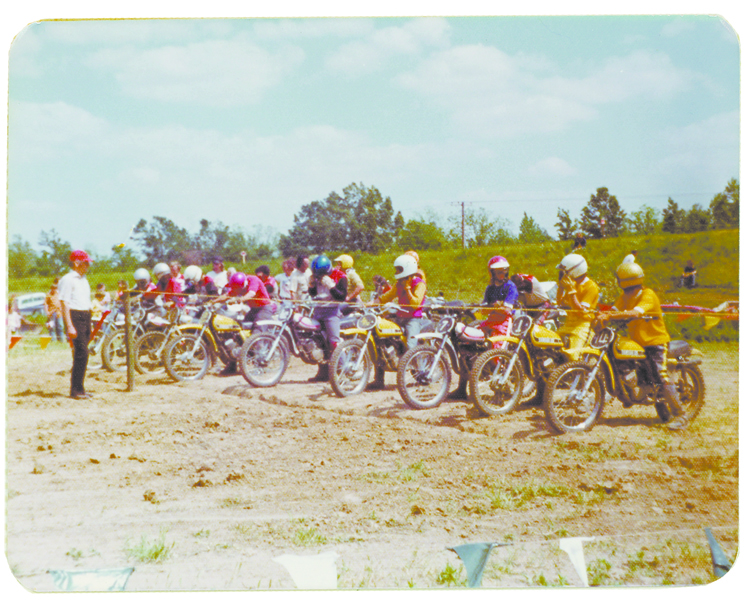 “We just loved it,” said Billy Ratliff, of Cleveland. “We had a lot of fun, stayed hurt all the time, but it didn’t matter.”

“I’ve been riding motorcycles off and on all my life,” said Gene Bishop. When he was in Alaska during the late 60s he started riding dirt bikes. Bishop returned to Cleveland and attended Delta State when he started working with a friend, Don Knight, who owned the local Yamaha motorcycle dealership.

They participated in Enduro motorcycle races. With this type of race, riders were racing against the clock and tried to maintain a certain average speed.

“When we used to race, everything was 24-mile-per-hour average, which is hard to do,” explained Ratliff.

The checkpoint routes in Enduro racing were marked with arrows for the direction riders should follow.

“You had to be kind of perceptive of what you were coming into in order to watch for them and control your speed at the same time,” said Bishop.

Ratliff said in the later days of Enduro racing only the strong survived. The trails were extremely muddy, the terrain very tough, and riders did not have to worry about time keeping as much.

Back in the 70s, the racing season started in February and ended in November. Cleveland-area Enduro racers rode their bikes for a season or two, and then sell the old bike to get a new one for the next season. Enduro racers wore boots with good ankle support, pants and shirts to protect them. The helmets they wore did not have the same type of face protection they do today.

“We knew we needed better face protection, so we went to a sporting goods store, bought football helmet face protectors, and bolted them to our helmets,” said Bishop. “Riders didn’t stay in hotels for the races, they used tents or campers during the weekend to stay in. I miss it, but my body doesn’t, and my age doesn’t. We were in very good shape back then.”

The most memorable race Ratliff rode was The Black Coal National in Evansville, Ind.

“It was the hardest national enduro advertised in the strip mine country,” said Ratliff. “It was a very tough environment to ride in. For me, that was an accomplishment. I wish I could do it today.”

Billy Marlow or Ruleville competed in the motocross bike racing circuit growing up.

“I raced all over the state, but we had a track right by the Sunflower River Bridge,” said Marlow. “I had a 250 cc Yamaha YZ.”

Marlow competed into his teen years and won his fair share of trophies during his time.

“I did ok for local guy,” said Marlow. “I won several trophies. It got pretty expensive — going places every weekend and keeping the bike in good shape. I guess I grew out of it. When you grow up, you get a reality check, and I guess I got that.”