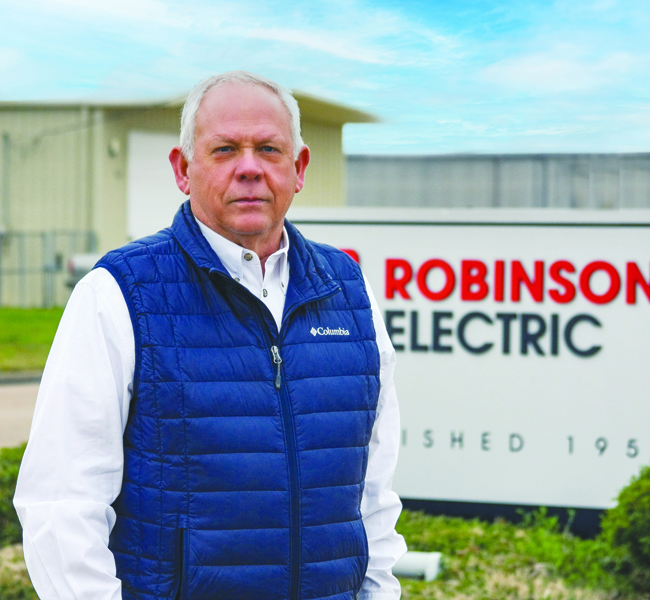 An exemplar of family, business and dedication

Recently retired from the company his father, Howard, founded in 1953—the same year he was born—Cleveland native David Robinson guided Robinson Electric to becoming one of Mississippi’s most successful privately-owned companies. Its unmatched integrity and professionalism mirrors Robinson’s own character, mindset and personality.

“My father worked as an electrician in Cleveland for a man named Harmon Sulton,” said Robinson, “before he decided to go out on his own and start his own business. His office was our family home for years on 1011 South Fifth Avenue, which is still there. My mother, Christine, was a registered nurse who stopped working in 1951 when my older sister was born, but ended up going back to nursing twenty years later, “ he continues. “”My mother worked basically without pay for the next twenty years by becoming the voice of H.C. Robinson’s electrical contracting business. She worked tirelessly taking calls, chasing my father down for emergencies and helped him complete the billing and other business needs. My father  had a storeroom in the back of the house where he kept tools and equipment and just bought what he needed for each job. Believe it or not, we didn’t move Robinson Electric into a separate office until 1994 because my wife, Kathy, and I took over the business in 1986 when my mother became ill with cancer and worked out of our house as well.”

Robinson officially went to work for his father in late 1974 even though he says he grew up right in the middle of the business, often accompanying his dad on jobs. Before going full time with the company, Robinson and Kathy (his junior high school sweetheart who he married in January of ‘74), lived briefly in Jackson where he worked for Stuart C. Irby Electric Company. “Actually, to back up, after I graduated college I had aspirations to become a wildlife biologist,” he said. “But, after a year and a half at Delta State, I realized that maybe entering that field required a little more schooling than I was willing to take on! So, I left  Cleveland and enrolled at Hinds Junior College in Raymond, Mississippi and completed my electrical training courses. That’s when I went to work at Stuart C. Irby and Kathy and I lived in an apartment in Jackson.”

Robinson recalls that things were tight initially for the young couple. “Oh, I can recall rolling up coins to go buy a burger and shake at the Dairy Queen in Jackson,” he said. “And, I’ll never forget that we had a neighbor at the complex, an older gentleman name Mr. Hallum, who took the Sunday morning newspaper. I’d sneak out early, go get it, read it, and then roll it up again and put it back at his door!”

Those kinds of times led Robinson to make the decision to call his dad and ask for a job back in his hometown.

“Daddy was working by himself then so he brought me up and we ran the company together until 1976 when we hired our first employee, a family friend,” said Robinson. “We did all kinds of electrical work: repairs, additions, working on new houses—you name it. It was an honest, actually fun, way to make a living and I got to learn a lot from Daddy. In the 1980s we started getting bigger jobs, like doing work for what was then Mississippi Power & Light Company, and I remember hearing from folks secondhand that MP&L would probably hire me if I wanted to work for them. But I made the decision to stay with Daddy and keep the company growing and I’m glad that I did, in retrospect.”

After Robinson’s mother was diagnosed with cancer in 1986, he recalls his father saying, “I’m done” and turning Robinson Electric over to his son. “He wanted to take care of her,” said Robinson. “So we moved the business to our house in the Fairfield subdivision. It was really different at first, running the company on my own. Truthfully, Daddy and I butted heads more than once and disagreed on things when I worked for him. Never anything too serious, but I do remember that, one day, he decided that I should get my own truck instead of riding with him to the jobs and that’s actually how the business began to grow.”

By this time, David and Kathy had their own family: Heather, who was born in 1976 and Brian, born in 1979, both who now work for the family business: Brian, as CEO and Heather, as Administrator Payroll/ Billing.

When Robinson took over the company, six employees were on staff. Under his leadership, Robinson Electric began finding a strong and growing niche, not only in Cleveland and Bolivar County, but in the entire Delta. “We got some big clients in Cleveland,” said Robinson, “including the Colonial Inn Hotel and Restaurant owned by Stanley and Clara Childs.   This was the biggest job we had done up to that time. That’s also when I started doing conduit work. This particular project was a  huge turning point for Robinson Electric and led to bigger jobs. Kathy also worked for us as the office and financial manager during this time, staying on for twenty-one years.”

Robinson said he and his crew worked six days a week after getting so busy “continuing to try and build up the company. That led us to the move from our house in 1994 and renting a building from Billy Perry downtown,” he said. “Coincidentally, during the process of the move, the infamous ice storm hit us in February of the year. I remember feeding our crew from our house during that time—and in three weeks during the aftermath of the storm, we took upwards of 1100 calls. We were hustling and working eighteen hours a day for thirty-two days in a row. It was a true test but, ironically, that terrible storm led to our growth and catapulted the business in a huge way. We served our customers well, learned a lot and it became a turning point for Robinson Electric.”

Not long after that, Brian graduated high school, during which time he had worked with his dad after school. “He took electrical courses at Mississippi Delta Community College and, when he finished, came to work for us,” said Robinson. “Heather also started working in the office part-time during the same period when she was in school at Delta State. Brian became a foreman for us, doing an excellent job, before he had a terrible motorcycle accident, breaking his neck and getting chemical burns on his body. As he recovered, he and I both thought it best that he stay with the family business full time.”

Robinson Electric had grown to about twenty-five employees and Brian, as he learned more about the business, kept up that growth, said Robinson. “New technology had emerged and Brian was on top of it—it was so different from how Daddy and I had run the business,” says Robinson. The elder Robinson passed away in 2000, living long enough to see how successful the business he had started in his home had become and the roles his son and grandson had played in that success.

By the late 90s, the company had grown to the point where they got their State Certificate of Responsibility which allowed Robinson Electric to bid on commercial contracts and larger work. “I took the test, passed it and we were then licensed to do all kinds of new, bigger work. Brian took the test as well, in the early 2000s, so the elevation continued,” he said. Then Hurricane Katrina leveled the Gulf Coast region in August, 2005 and Robinson Electric was, once again, able to respond nimbly and efficiently, in the process growing the company even more.

“Katrina was tough, though,” said Robinson. “I basically moved to the Mississippi Coast and ran our crews down there for the next year and a half. We provided electrical services for temporary houses, tents, mobile homes—it was unbelievable. Brian stayed in Cleveland while staying in touch with me on a daily business. The challenges were daunting—very tough. But we gained a lot of respect and notoriety, working for huge companies, including Bechtel, the giant federal contractor and doing excellent work during the recovery, I’m proud to say. But our own company had to deal with getting paid in a timely manner during Katrina, and so forth. Still, we came out of it bigger, stronger and better known.”

Around 2018, the thought of retirement began to creep into Robinson’s mind. “We had a business plan in place and, by that time, Brian was running the day-to-day operations,” said Robinson. “I was still active and involved, but Brian was president and taking the company to higher levels that I myself had never imagined,” he said.

Having officially stepped down from Robinson Electric in December of last year, David and Kathy are still leading busy and fulfilling lives, enjoying their own down time while also giving back to the Cleveland community that has meant so much to them, their family and the business.

“I’m District Chairman for the Boy Scouts in this region and an elder at Covenant Presbyterian Church,” said Robinson, “and just over the last few months I’ve especially enjoyed serving more at my church now that I have the time to do so. Kathy and I also love to travel with friends and are going to Alaska in May, for instance. Do I miss going to the office every day? Of course I do. That was my life for fifty years. At the same time, though, Brian, Heather and  so many loyal, great employees are still there overseeing the business. That sets my mind at ease. I still have an office, though, and I pop in from time to time,” he chuckled. “Robinson Electric has sixty employees now and has grown to heights that make me incredibly proud. And with Brian as CEO now and Heather on board, I see Robinson Electric staying strong and family-owned for at least another twenty years, hopefully. Brian has two daughters and Heather has a son—so who knows?!”

Brian Robinson, who now fills his father’s role in the company, said, “It’s hard for generational companies to be successful. And to have Robinson Electric now moving on into our third generation is a credit to my father. He’s such a generous and kind-hearted man who was always such a wonderful mentor. Work and family never posed a conflict for us,” the younger Robinson added. “We hunt and fish together, we travel together, and I don’t know how things could have gone any better for me—not only as a businessman but also as a son. I know I feel blessed to have a man like David Robinson as a father and mentor.”

Looking back over his long and successful career, Robinson said that the Hurricane Katrina experience sticks out in his mind as one of the most memorable points. “The fact that we, as a company, were able to do what we did and come out stronger—even while facing a number of internal challenges—and help the people that we did, people who depended on us, means the most to me,” he said. “It was probably our ‘finest hour’ as a business. And, I should also say, without the Cleveland community and the support we’ve received from so many people here, we would  have never been in the great position we’re in today. As I said at my retirement party, a lot of people here in Cleveland gave us a chance when many others probably wouldn’t have.”