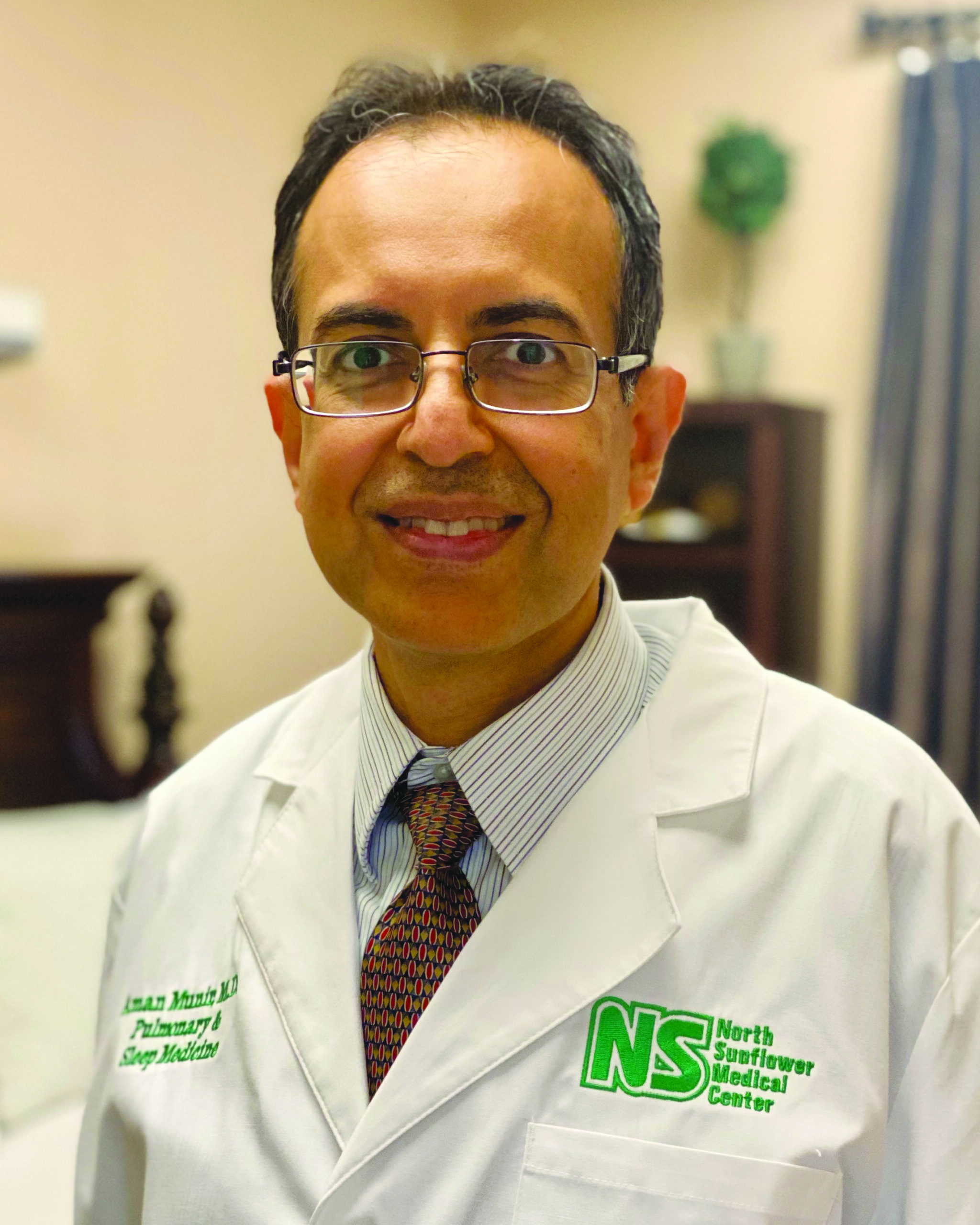 Dr. Aman Munir was recently named a full-time Pulmonologist at North Sunflower Medical Center after working as sleep specialist at the Ruleville hospital for seven years.

“I previously had worked as a pulmonologist in Clarksdale, affiliated with their hospital,” said Munir, “and have been in the Delta now for 16 years. During my time in Clarksdale, I also helped here at North Sunflower one day every month with their sleep studies clinic. However, I made the decision to permanently relocate to Ruleville a few months ago.”

Munir, who is originally from Pakistan and went to med school and received his medical training in New York City, had the opportunity to come to the Delta–and, after doing so, found he liked the area very much.

“Initially, though, I thought my wife and I would just stay in Clarksdale for a couple of years,” he said, “But, we ended up staying. I truly love the Delta and my patients and this is now home. It’s interesting to look back and see how I went from practicing and living in Manhattan to then living in the Mississippi Delta. It’s nice to have a house and yard, where I like to do vegetable gardening, as opposed to living on the 50th floor of a NY highrise!”

Munir still lives in Clarksdale with his wife and children and commutes to his practice in Ruleville. “And, I plan to retire here.”

As a pulmonologist, Munir said he would like to see more people get the Covid vaccine in the Delta.

“It’s preventable, especially now,” he noted, “and I wish Mississippi was more in line with the states having high fully-vaccinated rates, like 75%  or 85%. I believe now we’re only at something like 39% here in the state now and that’s just not satisfactory.

“I’m not dealing with a whole lot of Covid patients in my practice right now,” continued Munir. “I’m seeing more issues like a spot on the lung, lung cancer, asthma, COPD–classic pulmonary problems and diseases. When the pandemic first hit last year, however, and I was still in Clarksdale, I was definitely on the front lines and seeing the emergency cases in the hospital as the only pulmonologist on staff. That went on for me for an entire year. It was an incredibly stressful period for so many of us–doctors and patients alike.”

When asked what the favorite part of his practice is, Munir responded, “When I can take on a challenging case during a first visit, start treating my patients and see favorable, positive results in two months’ time when they return for their second visit–better breathing or sleeping–that’s the reward.”