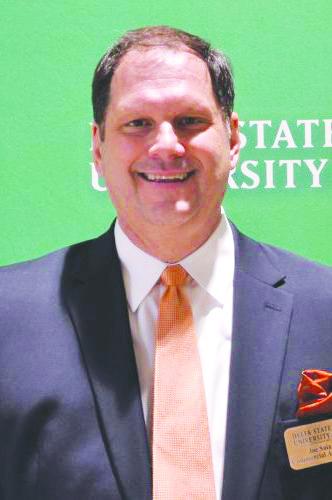 Delta State University is one of the premier choices for students who want a career as a professional pilot, and Joe Saia, interim chairman of commercial aviation, said even more is in store for the department with its already stellar program.

“Industry professionals agree that DSU graduates display the highest levels of proficiency and professionalism which make them prime candidates for positions in today’s aviation marketplace. In our program, you can get a Bachelor’s of Commercial Aviation with a major in Flight Operations or Aviation Management,” said Saia.

Currently, there is a shortage of pilots, which makes this a perfect time for students to choose commercial aviation as a career choice.

“In the United States, the approaching shortfall reflects an aging workforce approaching the mandatory pilot retirement age of 65 and fewer pilots to recruit from the military. Another problem is the US airlines began to cut costs once the pandemic struck. I estimate that as many as 10% of US pilots took early retirement during the crisis.

“The major airline I fly for recently had 1,700 pilots take early retirement. Based on trends like these, I expect airlines to face a severe shortage especially as we see the demand for air travel increase,” Saia added. “Too few pilots will result in fewer routes and lower frequency of flights in and out of airports everywhere. We may begin to see nonstop flights to smaller cities being dropped from airline networks, and the number of nonstop flights per week be reduced across the board.”

Saia said this could also mean higher fares to make up for the drop in revenue because of fewer flights and the slow return of business travel-which accounts for a large percentage of airlines’ revenue.

“The company that I fly for has reported ticket sales being stronger in the last few weeks than at any time since the pandemic hit the U.S. last year. This sharp return has prompted the three major U.S. airlines to announce a pilot hiring surge for many years to come,” he added.

To push DSU further into the forefront and to capitalize on what they offer and to the extent in which it is received by airlines and companies worldwide, Saia and his staff have worked with admissions at DSU to brainstorm how to promote their program and reach the high school students.

“This was realized when Dr. Otha Belcher, superintendent of the Cleveland School District called to say he wanted to discuss how we could partner and offer dual credit.  This will be one of the first, if not only, dual enrollment programs taught by the college professor via zoom. I look forward to the interaction of our college and high school students.”

Saia said they will add an introduction to aviation dual credit course with Cleveland Central High School for Fall 2021.

“This partnership will give an introductory look at Commercial Aviation and the careers that are available in the industry,” he said. “Being a professional pilot is my favorite part of this industry; however, I will be able to share with these high school students so many other potential career opportunities that can lead to very secure positions with great benefits.  Aviation careers have the potential of placing students at their peak in the top 6% of U.S. income earners.”

Saia said these high school students who elect to take this course can take advantage of this college credit that can be used toward their degree.

“We certainly hope the class will spark an interest in aviation thus choosing commercial aviation as their degree, but if not, the class can always be used as an elective with other degree choices,” he said.

The class, “Introduction to Aviation” provides basic knowledge for commercial aviation students who are on the pilot track program learning to fly, as well as pilots seeking advanced pilot certification. This class is also required for aviation management students.

“We will study the development of aviation from early attempts to space travel, as well as an introduction to private flying fundamentals, and career opportunities in the aviation industry,” explained Saia.

While being a pilot sounds rather romantic, Saia said flying a plane is not that difficult, but the path to qualifying for an airline pilot is quite difficult.

“Operating a commercial airliner requires years of flying experience and extensive aeronautical knowledge to become a professional and competent pilot. Pilots need skill and confidence to take the responsibility of conducting safe flights that millions of people around the world trust every day,” he said.

It is important to note that pilot training is only one aspect of their program.

“The Department of Commercial Aviation offers students the opportunity to, of course, become a commercial airline pilot in our Flight Operations major; but students in our Aviation Management major may be an airport executive, air traffic controller, airline dispatcher and so many other positions inside airports and aviation companies,” said Saia.

“Additionally, we have a new Logistics concentration that students may choose to enhance their major. This concentration focuses on the management and control of goods between companies, people and organizations. Logistics is becoming a trillion-dollar field in which students could stand to benefit should they choose this career path,” he added.  “With companies like Amazon, FedEx, Dollar General, and Walmart, we are seeing the global markets expand in new ways and like never before. The airline industry is just a part of the supply chain, but a very important link. It is estimated that more than 600,000 new jobs will be created in transportation and material moving by 2026 owing to increased consumer spending, resulting in greater delivery needs.

“The exciting part of this is that for every student we graduate with the logistics concentration, we have 10 jobs waiting for them. We recently positioned two of our students as supervisors for a nationwide retail company’s distribution center here in the Mississippi Delta starting at approximately $60,000,” he said.

“This is an industry-leading pilot development program which is designed to assist FedEx Express feeder operators with the recruitment and retention of pilots who wish to develop their skills and experiences to eventually qualify for pilot opportunities at FedEx Express,” he said. “The Scholarship Program provides $500,000 in grants dedicated to easing the financial burden of rising education costs on the next generation of aviation professionals. FedEx Express has collaborated with Delta State University to provide valuable education and training for aspiring pilots.”

As for Saia, he enjoys aviation and would like to introduce students to the occupation that has brought him great joy and provided him with a good living.

“I’ve been flying since I was 14 and it was all because a guy named Popeye Wood began teaching me in the grass strip in Wiggins,” he said.  “I was hooked forever.  To be in a position now to impact youth and their potential career decisions towards aviation is exciting to me. There are few people that aviation does touch in some way. Here at Delta State we have the tools to prepare young people for one of the most exciting careers. When we see students with a passion for learning and wanting to succeed, we can promise they will receive an education that will advance them to be competitive and successful enough to live the lifestyle they will have worked hard to achieve.”