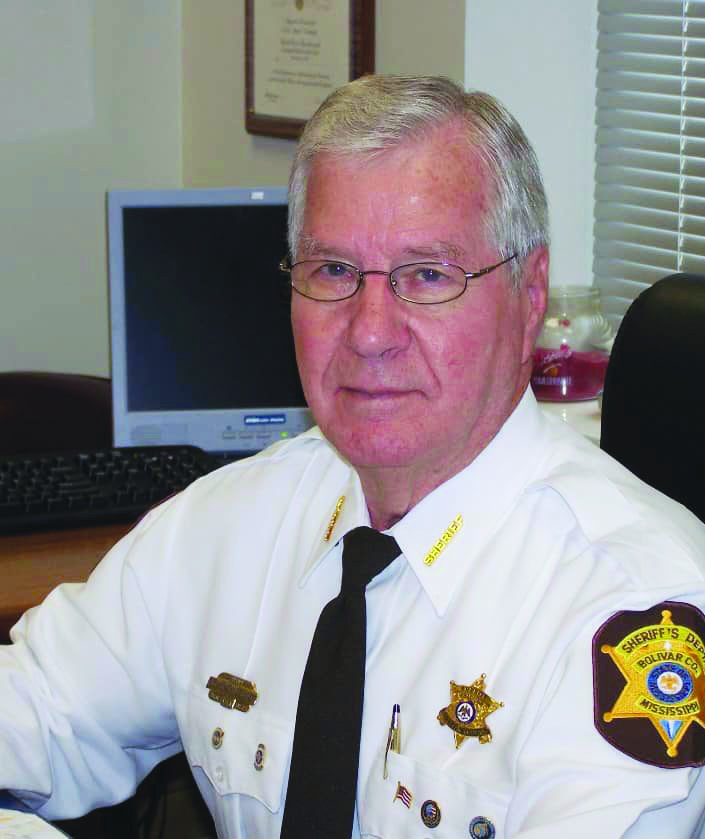 Former long-tome sheriff, H.M. “Mack” Grimmett took his last shift in Bolivar County as he passed away on Sunday (Feb. 27) surrounded by his immediate family.  Grimmett was 90 years old.

The son of a farmer had a colorful life and was one of eight brothers and sisters. He joined the Army, saw the world, and came home after an honorable discharge with 14 years served and more than a handful of medals.

From 1950 to 1964, Grimmett was part of the United States Army. He rose to the rank of Master Sergeant E7 before coming back to Bolivar County  to help his father with the family farm and eventually providing leadership to the sheriff’s office.

Upon volunteering for service, Grimmett was assigned to the 82nd Airborne Division in 1950 before being deployed overseas.

In a 2012 article, in honor of Veteran’s Day, which was featured in The Cleveland Current newspaper, Grimmett recalled his military experience.

“In ’52 and ’53 and the latter part of ’51, I was in Korea serving with the 187 Regimental Combat team which is a regiment of the 101st Airborne Division out of Fort Campbell, Kentucky.”

He then went to Japan before making it back to the states where he was a part of some highly classified work in both Georgia and Nevada.

“In Fort Benning, I was with what they called a tech group where we tested the 11th Air Assault Division that eventually went to Vietnam,” said Grimmett in The Cleveland Current article. “Then in 1957, I went to Camp Dessert Rock, Nevada and I was two miles from the point of detonation of an atomic bomb experiment. I had a top-secret clearance at that time.”

Grimmett and nearly 300 others were in what he termed a “Commo trench” – a fighting trench that is about six-feet deep – when the military tested the bomb on the effects it would have on buildings and other structures and vehicles.

“We were not where we could be hurt, but when the blast went off we could feel the pressure on us going out,” he explained.

He was also a General Subjects Instructor at Fort Dix, New Jersey where he taught other soldiers Military Justice, Military Courtesy, Bayonet Training, Hand-to-Hand Combat and Survival Training. The former sheriff enjoyed the military and was very proud of his service in the military and in the sheriff’s office.

Grimmett served a little over 14 years in the military, and it gave him a lot more than it took away from him.

With all of the positive influences it made in his own life, Grimmett would like for every young man to serve at least two years “and we wouldn’t have all the problems that we have now and it would teach them how to get along with people and teach them some discipline and how to respect other people.” said Grimmett.

After his service the former military stand-out tried his hand at several businesses, but eventually joined the Bolivar County Sheriff’s Department under L.B. Williams first as a Road Deputy and then as a Criminal Investigator. He learned quickly and decided to run for Sheriff in 1979. He won, took office and served the county for 32 years. In his last run for office, he was defeated by Kelvin Williams who still serves the county as Sheriff.

“We built a pretty good relationship. He was a consummate gentleman. Out of the three elections I’ve been in, the only person who called and conceded to me was H.M. Grimmett, the only one,” said Williams. “He said you can be Sheriff as long as you want to serve.  And every Christmas and every Thanksgiving, I would text and he would call me or he would call me first. People thought there would be friction between us and there wasn’t.”

Williams recalled going through sheriff training in Natchez and Grimmett let him know that he was there for anything he needed and would offer any advice or knowledge that Williams might need.

“That meant a lot to me and when we named the addition to the correction facility, it was my first order of business to put something on those grounds with his name on it. He treated me well and had no animosity. He told me ‘as long as you do good and do right, you’ll always be sheriff.’ And every election day since, he would call me and said, ‘you shouldn’t have no problem.’ That’s all he said to me.”

Williams was amazed that Grimmett handled the job for 32 years and fully understands what a testament that is.

“He was a mentor and he will definitely be missed,” said Williams. “I admire him for serving 30-some years. It has to be a calling from the Lord.”

Grimmett was a constant presence in family friend Tara Herrin’s life. Her grandfather was a big supporter of the Sheriff.

“The sheriff told me that my grandfather gave him his first donation in 1979. He gave him $1,000 when he decided to run. We were raised to support Mack Grimmett,” said Herron. “We supported him and he’s always been a great friend.”

She noted that “we always felt safe because he was sheriff. It was a safe, secure feeling. All my stories and memories of him are wonderful. I have known him my entire life and I do not have one bad memory of him,” Herrin said. “We should all strive to treat one another as he did. He did not know color, religion, or wealth. He treated everyone as his equal. He was a true servant, and he served his country and its people with all he had.”

She admired him so much, she asked him for a job.

“I had always wanted to work for the Sheriff’s Department. There was a fill-in dispatching position open years ago so I  asked him for the job. He questioned me as to why I wanted it. I simply said that I wanted to work for him. He gave me the job knowing that I had a full plate with the restaurant,” she said. “I am sure he knew that I wouldn’t be able to do it long-term, but that didn’t matter, he still gave me the opportunity. He was right. I couldn’t run my own business and work for him but he let me try. I learned so much during my short time working under him and have always been thankful for him giving me a chance. That’s just who he was. Like I said, I don’t have one favorite story because they are all my favorite.”

Ray Funeral Home in Cleveland is handling arrangements for Sheriff Grimmett’s service. Visitation will be Wednesday, March 2, 2022, at First Baptist Church in Cleveland from 12:00 Noon to 2:00 p.m. Celebration of Life Service will immediately follow at 2:00 p.m.