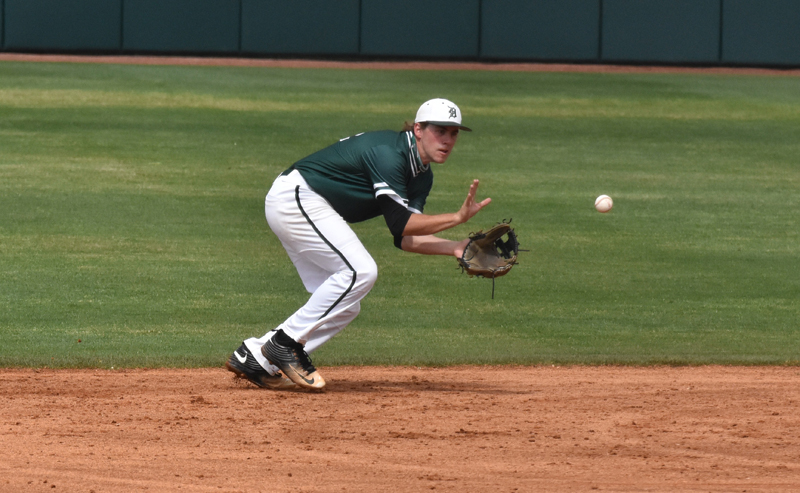 In the first 17 games of the year, senior shortstop Darek Sargent wasn’t exactly having a dream season for the Delta State University Statesmen.

Sargent, who is in his fifth year with the team, wasn’t interested in staying in his slump.

“It’s my final season, and I was trying to find anyway I could to help out the team,” said Sargent. “I was struggling, but I was just trying to get a hit, a walk, just whatever it took to get the team a win.”

Sargent’s hardwork and persistence paid off as he finally got on track at the plate. Since March 20, Sargent has hit safely in 19 of his last 27 games and is hitting .284 (29-for-102) during that time to raise his average to .230.  Sargent had a huge series in the Gulf South Conference Tournament at Oxford, Ala. as he went 6-for-14 for a 429 average with three RBIs and three runs scored. Among those six hits, he stroked a triple and a double. His production as of late has been instrumental in DSU advancing to this week’s GSC Title series against the University of West Florida. In the first game of the GSC Title Series against West Florida Sargent drilled a two-run home run to push the Statesmen to a 2-1 victory over the Argonauts of West Florida.

“I really worked with Coach Batts quite a bit to figure out what was going wrong and how I could fix it,” said Sargent. “Really, it was all mindset and kind of relaxing and knowing that I was better than what I was doing and had more in the tank. I was just trying to tap into that.”

In today’s era, many times when hitters go into slumps at the plate, coaches tend to sit players down or bench them for a couple of games and sometimes the rest of the season. Heading into this week’s series with the University of West Florida, Sargent had started in every game for DSU this year. In his five-year career at DSU, Sargent has been through the wars. He was a key player for the Statesmen in 2019 when they won the GSC Championship and advanced to the NCAA Division II Super South Region Series against the University of Tampa. In 2019, Sargent hit .269 with eight home runs and 55 RBIs in 56 games, all starts. Dating back to 2019, Sargent has hit .349 (22-for-63) in 16 postseason games which include the GSC Tournament, the NCAA Division II South Region Tournament and the Super South Region Series.

“Darek has the capabilities of being a good hitter,” said Batts. “He showed it over in Oxford. For the majority of the year, things have not gone his way but there was never a thought about taking him out of the line-up. I don’t care what he hit, he’s a mainstay at shortstop for us. He’s one of the best shortstops in this league. Whatever woes he was going through offensively, he never carried that to the defensive side with him. I knew or hoped that thing would turn around for him. He’s been in the league a long time. He’s seen these pitchers, and he knows what it takes. He just kept working at it, and things have turned around for him over the last few weeks.”

In the field, Sargent has been solid all year but even better as of late. He has made just one error in the past seven games. For the season, Sargent has a .943 fielding percentage as he has committed just 13 errors and has turned 31 double plays in 226 fielding chances . He leads the GSC in assists (145) and is tied for third with teammate and second baseman Jake Barlow in double plays with 31. Sargent’s career fielding percentage is .945.

Barlow and Sargent both came up together in 2017.

For Barlow, working next to Sargent in the field is pure fun.

“We’ve got really good chemistry,” said Barlow. “I know what he’s thinking most of the time and he’s knows what I’m thinking. That’s my guy over there. We’ve been together five years now. We came in as freshmen together. We’ve been doing that for a long time. I know what he’s thinking before the ball is even hit. I think that helps a lot to know what to do before the ball is even put in play with me and him right there in the middle.”

Batts felt Sargent has great instincts when he mans his position.

“I think he understands hitters and understands swings.” said Batts. “I don’t have to move him at all. He knows where the guy hit it his last at-bat. He reads hitters very well. He adjusts to the way we’re pitching guys. He gets really good reads on balls. His hands are really good. The thing that makes him so good is he gets rid of the ball so quick. His arm is good enough to play there obviously, but he understands when he’s got time and when he has to really get rid of it with a guy getting down the line. He has a really good feel for that.”

Sargent, a native of Smyrna, Tenn.,  was able to gain an extra year of eligibility due to the 2020 season getting cut short because of the  COVID-19 pandemic.

For the  fifth-year senior, the events of 2020 adds extra significance of being able to play for a conference title this year.

“It does feel a little bit different,” said Sargent. “It feels like I haven’t been here in a decade. It just feels like a very long time. This is my favorite part of the year. Not getting to play it last year was disappointing, because this time of the year is really what you  play for.”