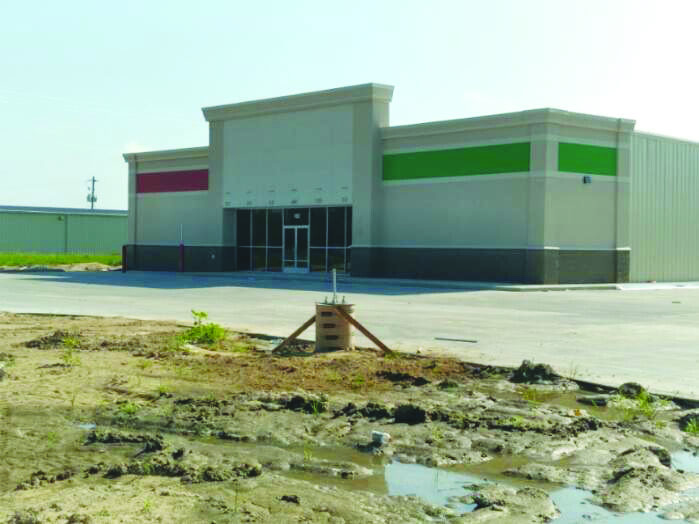 A combination Family Dollar/Dollar Tree store is nearing completion on Hwy. 61 in the town of Shaw. According to town mayor, Everett Stanton, negotiations to bring the national chains in began around the first of the year when company officials approached him with the idea.

“The process was very smooth,” said Stanton. “And, we expect both businesses to be open by the end of the summer. Workers are inside the building finishing up on air conditioning, putting up sheetrock and doing other last minute touches. All work is on schedule.”

The two separate stores will be housed in the same structure.

Stanton said the stores should bring approximately 20 new jobs to Shaw as well as much-needed convenience to the town’s citizens.

“We truly needed these particular businesses,” the mayor stressed. “The fact that both stores, while not full groceries, do carry food items–among many others–is especially crucial because we have to drive 10 miles to Cleveland for the nearest grocery store.”

Stanton said he is pleased with the arrival of Family Dollar and Dollar Tree, not only because of what they will offer, but also perhaps the stores acting as a magnet to bring in future development.

“I’m especially hopeful that we’ll see a grocery chain come into Shaw at some point because of these new stores,” said Stanton. “Benoit, 15 miles away, has no grocery store. East of town, people have to go to Indianola or Ruleville for groceries. Shaw is somewhat centrally located among several different towns and communities and I think it would make economic sense for a grocery store to be built here–it would draw a number of people from this area.”

Stanton said he has not made contact with any grocery chains or groups nor has he heard from any of their representatives.

“For now, though, we’re all very happy with the Family Dollar/Dollar Tree store,” said Stanton. “We’ll have a nice ribbon-cutting when the stores open soon and it’ll be a great day for our community.”