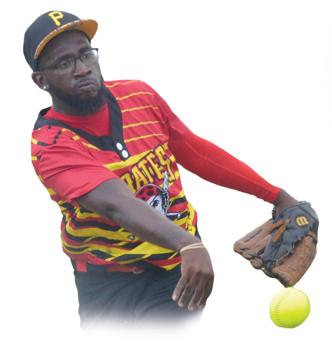 During the summer-time, there’s nothing like getting together with family and friends to play sports.

And sports, when structured into a league can have an impact on the communities where they are played.

The Delta Softball League has been having this type of effect on cities in different parts of the area for 45 years. The league is made up of seven teams, the Drew Mets, the Cleveland Hitmen, the Shelby Sluggers, the Shaw Warriors, the Riverside Gators, the Ruleville Pirates and the Rosedale Blazers. The league is a mixture of players young and old.

DSL Commissioner Steven Toliver felt the more experienced players do a great job of setting the tone in the league.

“It’s special because of the dedication of most of the older players,” Toliver said. “We’re trying to keep it together. We’ve got two commissioners this year, and we try to keep everything real simple. It gives them something to do over the summer.”

One of the biggest obstacles this year that has posed a problem for any league has been the COVID-19 pandemic. The pandemic has shut down a lot of sports since March. Despite the obstacles of the pandemic, the DSL has been playing its season since June 12.

DSL Assistant Commissioner Michael Pointer, who has been involved in the league for 28 years, was pleased with the fact everyone was able to work together to have a season this year.

“We encourage the masks,” said Pointer. “At several home games, we’ve had parking areas for cars, and we have seating areas for the fans. We blocked it off on how far apart to sit. We discussed how we were going to handle it. It almost caused us not to have a season. We’ve used extreme caution.

“We have people in law enforcement, we have coaches, we have entrepreneurs that actually play this game. When kids come out and fans come out, they see and they’re like ‘Wow, I didn’t know he played.’ It brings them back out.”

Pointer feels the league does a good job of giving men a chance to be a positive influence in their communities.

“It’s a variety of young men that are trying to set examples for our younger men that are coming up,” said Pointer. “The league is very valuable because a lot of people come out and see how we conduct ourselves and things like that. That’s what makes it work. We’re to be role models for young people who come to these games.”

The league held its All-Star game on July 5. The game is rotated to a different town every year, with this year’s event held in Rosedale.

“We recently had our All-Star game which was attended by a lot of people. It brought Rosedale more people to come in and buy things and kind of boost up their economy a little bit,” said Pointer. “That’s what happens when we have these large All-Star games. We try to move them from community to community, so that way everybody can share in it. It brings out the people, and they sit and they laugh. They enjoy their hometown heroes. That’s what we enjoy doing.”

Cleveland Hitmen coach Drefuis Randle, who has been playing in the league for 26 years, said the league has been special for everyone involved.

“I look forward to it every summer,” said Randle. “As far as the surrounding areas go, everybody is competitive but at the end of every game we all bond like brothers. It’s been a joy for 26 years to have been able to play this long really. I can’t put into words how many friends I’ve met over the years playing in this league.”

Preston Billings has played in the league every year of its existence. For Billings, the sport of softball is another way for him to stay active and show younger folks the work ethic to advance in sports.

“It’s a challenge for me,” said Billings. “I train year round. Even when I was in high school coaching, I trained with my ball players. I didn’t blow a whistle. What I wanted to do, I did it for them. If we were going to do 50 laps, I did 50 laps. If we’re going to do 500 jumping jacks, I did 500 . If we’re going to run five miles, I ran five miles right out in front. I led by example and that’s what I do now. If you’re going to do anything, you’ve got to be self motivated. You can’t wait on your friends. They might want to go do something else.”

“All of these young men from Rosedale, Mound Bayou and Benoit, I’ve coached them and most of them I’ve coached against,” said Billings. “This is the Delta Softball League. We provide what you call free entertainment. Nobody is paid. They just show up, enjoy the game, have fun and go home. We’re going to keep this league going.”