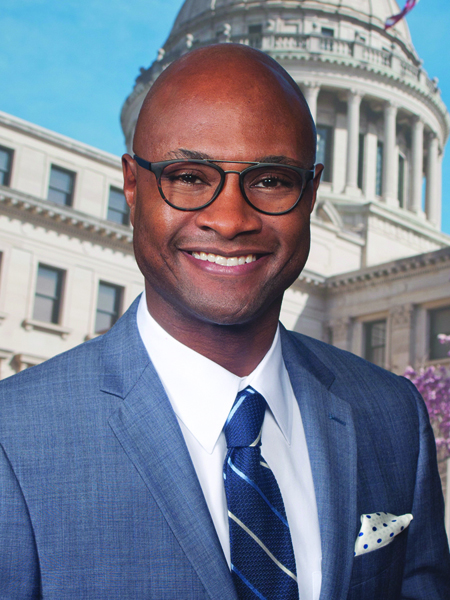 Representative Abe Hudson (D) announced his resignation from the Mississippi House last Friday, August 27, in statements released to the media and on his personal Facebook page. His resignation became effective August 30. While Hudson did not give a specific reason for his resignation, Facebook posts suggest he will be taking a position at the Walton Family Foundation. The Walton Family are the founders of WalMart and are based in Bentonville, AR.

Hudson had served in the House for five years after being elected in June of 2016 and represented House District 29 over Sunflower and Bolivar Counties. He served as the Vice-Chair for the Ports, Harbors and Airports committee and also served on Agriculture Drug Policy, Tourism, Transportation and Wildlife, Fisheries and Parks committees during his tenure.

Hudson released the following (edited here for space) remarks regarding his resignation: “…after winning a special election, I have served as your Mississippi State Representative for Bolivar and Sunflower counties in the Historic Mississippi Delta since June 25th, 2016. Serving in this capacity has been one of the highest honors and proudest accomplishments of my life. To the constituents of Bolivar and Sunflower Counties along with other substantial support from around the state of Mississippi, I owe it all to you that I have been given the opportunity to serve the last five legislative sessions where we have daily worked for you with no days off. In the midst of a pandemic, we have made unusual strides. To name a few, we retired the confederate flag, passed medicinal marijuana, and took Jim Crow Era laws off the books.

While this journey has been exciting and rewarding, there come pivotal moments in our lives when we know it is time to start another chapter,” the statement continued. “Many of you are probably asking why now? I believe that my transition will allow both the Mississippi Delta and I to grow; Furthermore, it will allow someone with a fresh perspective to lead our area out of many of the challenges that we have aggressively started to address…Whoever the next representative is, he or she can count on my full support as they take on their new responsibility.

While I have not always agreed with the politics of all my colleagues, I have valued the opportunity to get to know each of you so that I could better understand the areas you represent. Conversely, I hope you took something from our conversations that made you more cognizant of the systemic issues the Mississippi Delta has and continues to face. To the 121 House members I got to serve with each legislative session, I say thanks for challenging me to be a better me and a better Mississippian. I will forever remember the experience. Many would say Mississippi has a long way to go, but I think we are closer than we think. Keep fighting my comrades, keep fighting.

…we must all tirelessly keep pressing forward. Public Education, Healthcare, Infrastructure, Criminal Justice, Election Reform and Affordable Housing still need legislation that will move the pendulum forward. Therefore, in my new role, I will keep working to make sure areas like Rosedale, Winstonville, Benoit, Pace, Beulah, Symonds, Gunnison, Mound Bayou, Shelby, Renova, Merigold, and Cleveland have the full attention of those who can support their growth. I did, I do, and I will forever love my Mississippi Delta. She has made me who I am, and I am hopeful others will begin to understand her past and present so that it can have a positive impact on Mississippi.”

In a brief interview with The Bolivar Bullet conducted last weekend, Hudson said, “The things I’ll miss the most are the daily constituent calls about things that never make it into the press. The Mississippi Delta has many challenges, some hidden, but at the same time tremendous opportunities exist. There are a couple of different things I’m pondering as far as my future is concerned, but there is one opportunity that I’m eager to get started on and I’ll make a formal announcement over the next month.”