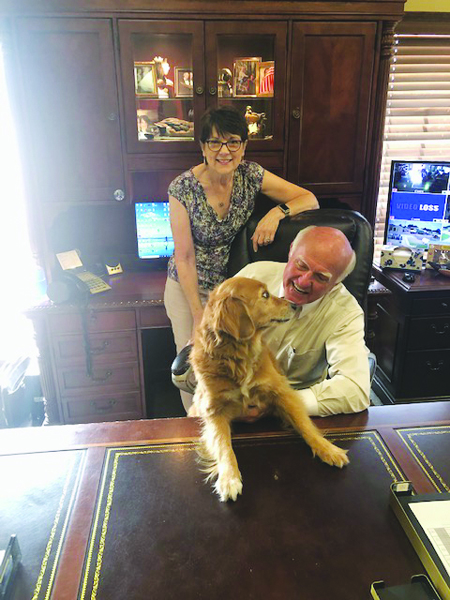 cuddly co-workers: Top left, Whiskers and Ava keep the crew at Bolivar Tire and Auto on their toes. Bottom left, Daisy greets all the customers at Lance’s Automotive. Right, Tex, Turk, and Annie enjoy helping keep the Westerfield, Janoush, and Bell law firm up to snuff each and everyday.

Kay and Ed Coleman’s dog Molly helps make every workday at Mid South Water feel like a day at home.

People enjoy the company of their pets. And, it’s a given, pets love to be with their families, just about all of the time. Whether it’s Fido the Dog or Fluffy the Cat, Leo the Lizard or whatever family pet someone has, pets enhance and enrich our lives tremendously.

And, some of them go to work with us.

Warren Bell is an attorney in Cleveland with Westerfield, Janoush, and Bell. For the last 12 years, Bell has had a little company along with him every time he goes to work.

“We’ve always had dogs here in our office, ever since we’ve been practicing,” said Bell. “Andrew Westerfield had a chocolate lab named Dakota that would come every day. Tom Janoush has two dogs, a white Golden Retriever, Turk, and a Cocker Spaniel named Annie. I have a Brittany Spaniel named Tex. And, since he was a pup, Tex has loved coming to work with me. He’s 12-years-old now.”

Bell said all of the dogs get along great together and when people come in the front door, they’re there to greet them.

“Most everyone loves the dogs,” he added. “Occasionally, we have to put them up if someone is shy or afraid of dogs, but for the most part they are always a part of our everyday office life. Tex goes everywhere with me and I wouldn’t have it any other way. He’s very attached to me, so if I leave him at home, when I return he’s looking out the window, waiting for me to come back home. They hang out in the office, just laying around and loving it and everyone feeds them when they’re eating their lunch.”

Gena Aycock and her husband Michael own Lance’s Automotive in Cleveland. The Aycock’s have a dog named Daisy that is an eight-year-old mixed breed they got from an animal shelter when she was a puppy. Her life may have started out a bit rocky, but today she’s loving her automotive life for sure.

“We moved up here from Jackson and took over the business,” said Gena Aycock. “At first, we lived with Michael’s brother, so we would leave her at his house while we worked. We moved into a rental property soon after and we couldn’t have her at the house. So, we keep her at the shop and she just loves it. She greets the customers and while a few might be shy of her, most of them just love her. She loves playing with tennis balls and some of our customers will bring a tennis ball to her. She’s been staying here for about five years now, so she’s an important part of our lives and business.”

Ed Coleman owns Mid South Water in Cleveland. He and his wife, Kay, who works with him, have a Goldendoodle named Molly that is a major part of their family.

“Molly is a five-year-old, female Goldendoodle that we purchased from a breeder in Canada,” said Coleman. “She goes to work with us and almost any other place we go. She is definitely a family member. She was bred special in Canada where I bought her. She’s about 40 pounds and looks more like a Golden, but she’s also part mini-French Poodle. She is a part of the family and sleeps in the same bed we do, which is something I thought I’d never do. She rides with me in my truck and goes with my wife in her car. If we travel, any hotels that will allow pets, we bring her along. If not, we have someone who takes care of her. She’s so smart, she can almost sense what we want her to do before we tell her. We love her very much.”

At Bolivar Tire & Alignment in Cleveland, owner Dave Alford said that Whiskers the cat showed up about nine years ago as a kitten. One of the workers there started feeding and taking care of the kitten and then customers began to donate things for the animal, such as a litter box and toys.

“Whiskers has been in our lobby for about nine years now,” said Alford. “She doesn’t go outside at all. She stays in the lobby all the time. Then, just this year, my manager raised the hood on a customer’s car and there sat a kitten on the top of the motor. So now we have two cats in the store,” Alford laughed. “Whiskers didn’t like the new addition at first, but now they’re like mother and daughter. Whiskers will lay around on the counter, just chilling during the day. The little one, we named Ava because we found her in a Toyota Avalon, is much more active and playful. Most of the customers love them both.”