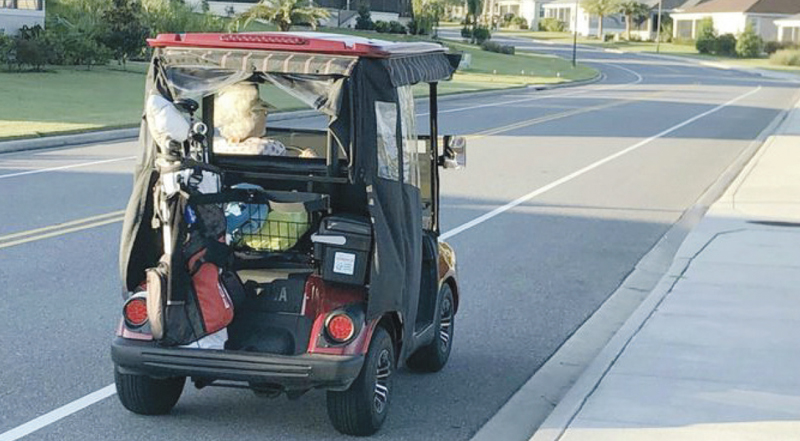 Regulations regarding farm equipment and golf carts in Cleveland.

If there are several sights that Clevelanders have become accustomed to on the roadways over the years, it is tractors, combines, and golf carts. While there is no doubt farm equipment is necessary and golf carts are fun. Are they street legal?

Chief Buster Bingham said agriculture equipment does have the right to be operated on the roadways. “We just urge caution when you see one,” he said. “Slow down and prior to trying to pass, make sure the roadway is clear and when passing, make sure you have space between you and equipment you are passing. Sometimes equipment is extra wide with attachments, so that is something else to pay attention to when you are trying to pass. Also, if they are driving down the roadway, they usually keep to the right as far as they can, but they will have to come left to go around signs, telephone poles, and mailboxes.

Try and give them as much room as possible to avoid any accidents.

Golf carts, four-wheelers, mopeds, and other smaller motor vehicles may be a favorite gift, but they are not legal for underage drivers.

“The city does allow golf carts on the roadway to travel to and from golf courses,” said Bingham.

However, children whodo not have a driver’s license from 13-years-old to 16-years-old can be ticketed if they are caught driving a golf cart or other motorized vehicles on city streets. Those who are 12-years-of-age and under and operate a motor vehicle who are caught, run the chance of the golf cart being towed at the owner’s expense.

“There’s a lot of children that jump on golf carts and don’t pay attention to the rules of the road and pull out in front of cars and drive recklessly. We are trying to prevent children from getting hurt or killed by a car,” he added. “We are asking parents to help us by instructing children who are not licensed drivers or under the age of 12 to not get on the roadways with any type of motor vehicle.”

Bingham noted the police department receives complaints on children driving these vehicles on a weekly basis.

“We will have to enforce this,” said the chief. “Children do not pay attention or even know the rules of the road. They do not stop at stop signs or see if it is safe to go across the intersection or from what is coming up behind them. They are often overloaded. There may be four to five kids on them. It’s the same with four-wheelers.

“We don’t want to ticket these children or tow the vehicles, but unfortunately, we have to for their own safety and the safety of the driving public,” said Bingham.