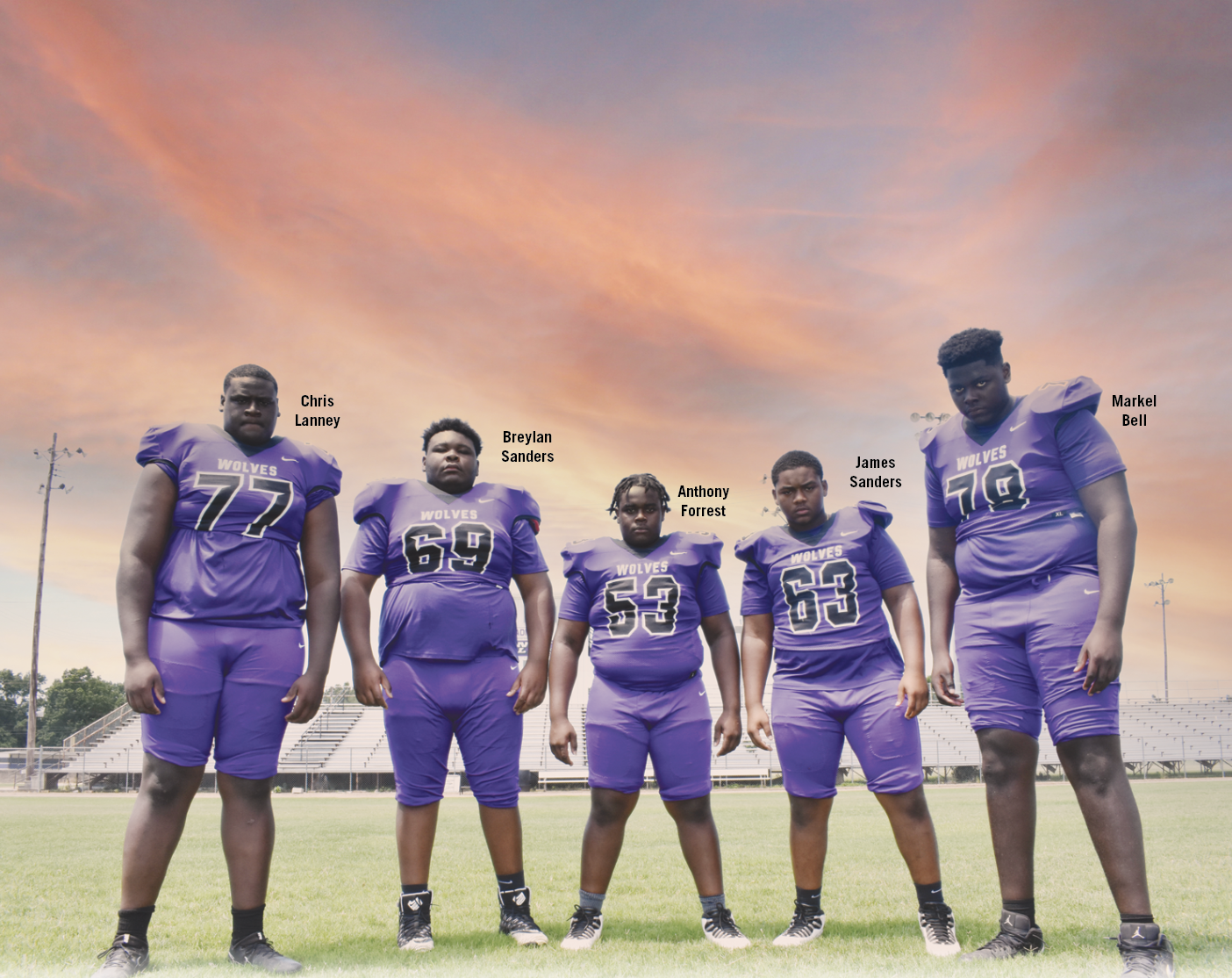 The key to a successful offense is more than just having a quarterback that can throw, a receiver than can catch or a running back that can run.

Everything starts with those  guys up front which is the offensive line. They keep defenders off of the skill position players so they can do their jobs to put points on the board.

With football season just two months, one area that’s a strong point for the Cleveland Central High School Wolves is the offensive line. The Wolves have a lot of beef on the line as their five starters weigh a combined 1,625 pounds.

CCHS Head Football Coach Kendrick Woodard has been impressed with how the players in the group work well together and how they conduct themselves when they’re not on the football field.

“Chemistry up front is very key when you’re talking about being able to identify defenses,” said Woodard. “Sometimes, those guys don’t even have to say a word up front, because they’ve been together for so long. They’re able to identify and see what the defense is trying to do up front. Outside of the football field, they’re the best of friends. They’re great guys. They’re Coca-Cola drinking guys. They don’t get into any trouble and all of them make really good grades. I think all five of them are going to be qualifiers. Everything that they do, they have so much in common in their personality, the way they dress, the way they act, it’s just amazing. This group of guys are closer than any other group I’ve ever had. I’m glad to have those five guys playing for Cleveland Central.”

Bell, Lanney and Breylan make up most of the size on the line.

Woodard loved what those three bring to the table.

“Markel, at 6-8, is one of the most athletic kids I’ve seen in a long time,” said Woodard. “Chris doesn’t quite move as well as Markel, but he’s come a long way. As a freshmen, Chris couldn’t even hardly touch his toes but now he’s squatting really heavy. Those guys have gotten stronger. The thing that has helped the most is the work those two have put in during the offseason. With having those guys on the opposite side of the ball, I have 100-percent confidence in running the ball on either side. Markel and Chris kind of lead the way. Breylan squats 500-pounds and is close to 400 pounds on the bench. He is a 600-pound dead lift guy. If you just look from a power stand point, Breylan brings a little bit more power than those other two guys. Breylan does an awesome job for us. We have him and Chris Lanney on the same side, so you’re talking about some really big guys on that right side.”

Woodard felt that Forrest and James bring a lot of skills and knowledge to their game at their positions.

“With Anthony being the center on the team, even though he is the smallest, you kind of want to consider him the leader of the bunch,” said Woodard. “They seem to follow his lead. He is more of that leader type with him making all the calls and the checks up front. at the center spot He’s the most knowledgeable guy that we have up front. He put in the work to be where he is now.

“James is the most technically sound player,” added Woodard. “We call him Mr. Technician. He’s really good with his technique. He’s a really smart guy. He works really hard, and he’s come a really long way too. He didn’t even play football as a ninth grader, but he came out for it as a 10th grader. He sat a little bit. Last year, he was able to start. He a got a little bit stronger. He made it to North Half in powerlifting.”

Forrest said the line is focused on giving the guys in the backfield all the time they need to do their jobs to put points on the board.

“The purpose of the offensive line is to make sure our running back Jay White and our QB Jaryn Kelly will be able to execute in the backfield, while we’re up there blocking in the trenches,” said Forrest.

Another aspect of the line that Woodard is pleased with is the strength of the guys on the line.

The 2020-21 school year hasn’t ended for schools in the Cleveland School District as Cleveland Central’s last day is set to be at the end of this week.

Forrest said the guys have taken advantage of the time they can work while they’re going to school.

“We’ve worked very hard,” said Forrest. “We’ve been in and out of the weightroom everyday and every week with no days off. We’re out here in 90-degree weather in the evening, while everybody else is out of school working in the morning when it’s cool.”

James said the guys thrive on being a part of the offensive line.

“We take a lot of pride in playing on the o-line,” said James. “You’ve got to be a grown man to do this. We try to lead our team the best way possible. We feel like we’re the most complete group.”

The Wolves have struggled the past three years as they’ve suffered three straight losing seasons and haven’t made the 5A State Playoffs since 2017.

James said the guys up front are hungry to make 2021 a special year.

The first official game for CCHS in the 2021 season will be on Aug. 27 when the Wolves host Murrah High School from Jackson.