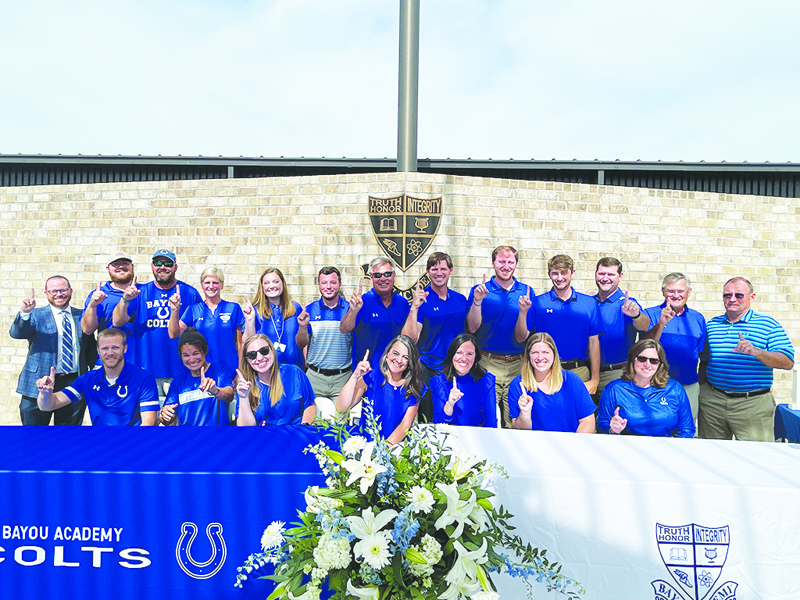 The school year provided a lot of exciting sports action at Bayou Academy.

Most every sport Bayou played saw the Colts and Lady Colts advancing to the state playoffs.

When the finals points for the Midsouth Association of Independent Schools 5A All-Sports standings were totaled, Bayou finished first with 35 points to bring home the 5A All-Sports Award. The school edged out second place Silliman Institute which finished with 33 points.

The football team just completed its third year on the 5A level, while it was the first year for all of the other sports.

Bayou Academy Athletic Director Flip Godfrey was proud of everyone involved in the programs.

“The people that did this were our student-athletes,” said Godfrey. “What they’ve endured moving up to 5A, it’s just a real tribute to them. The all-sports trophy is so significant, because it’s all sports. We had so many different teams that contributed. It’s just the ultimate award, and we were so proud of our students, our staff, our patrons and the whole Bayou community. We’ve accumulated a coaching staff that has really, really put the ball in their court, and we’ve gone after it. We’ve taken on the 5A challenge and now we’re winners of the all-sports trophy.”

“It’s a testament to how the kids worked and the coaches worked,” said Cox. “It’s great to move up to 5A and win an award like that. It just shows the depth of the sports in the athletic program at Bayou. It was cool to win and from a personal standpoint see some smaller sports like tennis do well.”

The boys basketball team went 22-17 and finished third in the 5A State Tournament and advanced to the MAIS Overall State Tournament for the first time since 2002 during the winter, the cheerleading squad won the tumbling division at the 5A MAIS Spirit Competition during the fall, the boys soccer team had its best season by going 13-5 and advancing to the 5A State Semifinals in the winter and the swim team made its impact by finishing eighth in the overall state meet and third among 5A schools in the fall.

“I’m extremely proud of our teams,” said Colts Head Basketball Coach Wesley Aldridge. “We’ve come a long way in a short period of time. I’m glad our boys basketball team could contribute by finishing in the top three in the state.”

One of the biggest things about Bayou’s success is that several athletes play more than one sport and succeed in each one.

“We’re getting our best athletes in multiple sports, and they’re really contributing to the athletic program in that way,” said Godfrey. “Our coaches work together. Our basketball coach, Wesley Aldridge, he wants his players to play football and vice versa. I want our football players to run track, play basketball and play tennis. I think that’s one of the key components to us winning it.”